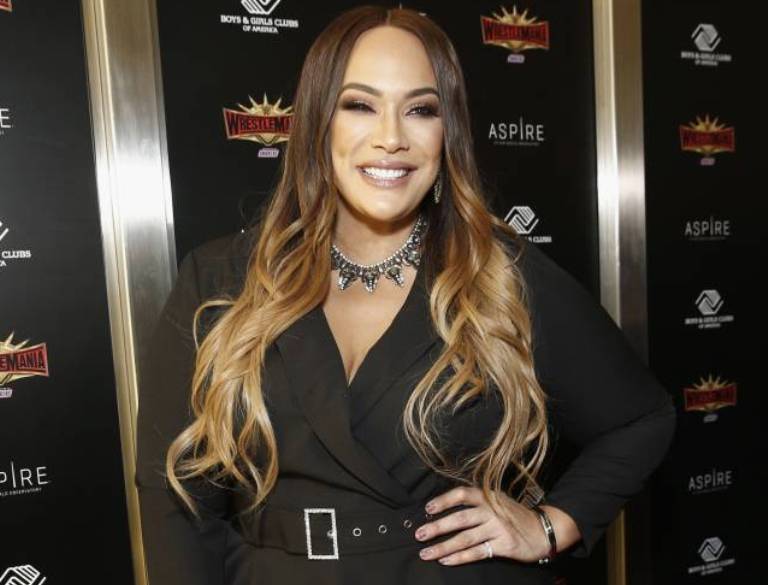 Savelina Fanene, whose ring name is Nia Jax (formerly Zada), is a professional wrestling champion and also a plus-size model. She is under contract with the RAW-Platform (Women Division) and became RAW Women Champion shortly after.

Nia Jax is considered a villain (bad girl) in the division and has a history of professional feuding. There is so much you should know about this wrestler. Read on…

Nia Jax is of mixed descent as her father, Joseph comes from the Samoan line. Does he belong to the Anoa’i family, which is descended from American Samoa; these boys are known to produce professional fighters and wrestlers. Their mother, however, is of German descent. Nia learned from her mother to speak the German language.

It is worth mentioning that she is a cousin of retired WWE superstar Dwayne “The Rock” Johnson, who spurred her on to a career in professional wrestling; Dwayne remains her biggest fan.

Based on the assumption that she was born in Honolulu, Hawaii, she is named as one of the six superstars whose place of origin can be traced back to the islands of Aloha. Coming from the wrestling family Anoa’i, Nia Jax initially showed no interest in this sport but was interested in karate, judo, and kickboxing as a child. Her parents, who did not want to force her against her own wishes, encouraged her by enrolling her in karate and judo classes. However, she got into trouble and was sent home because she had attacked another child. Her instructors reported that she was too strong for the class because she liked to beat up her classmates.

Nia Jax played basketball in high school because she had the size for it. Her achievements in this sport earned her a college scholarship to attend Palomar College, where she continued to play basketball. In 2003 her team won the Pacific Coast Conference Championship. Nia was so good that she was to play in the Women’s National Basketball Association (WNBA). But then she decided to make a change and pursued a career in professional wrestling.

Even if she ignored it at first, it was only inevitable that Nia Jax would one day accept life as a wrestler, after she was ripped out of the Anoa’i family, which is known for forging professional wrestlers and champions of World Wrestling Entertainment (WWE).

After spending a fairly successful time playing basketball (in college) and modeling, she honored her bloodline by signing up for wrestling after watching the Wrestlemania match “Once in a Lifetime Match” between her cousin Dwayne “The Rock” Johnson and John Cena at Sun Life Stadium in Miami, Florida.

The match on April 1, 2012, ended with The Rock winning, but he was not the only winner, as WWE also received the signature of another female wrestling superstar – Nia Jax.

She decided to take a break from her burgeoning modeling career to become a professional wrestler, and The Rock was a great supporter. He brought her to the WWE Performance Center in Florida and put her in touch with the best coaches who could help her achieve the best possible results in the field.

Nia signed her first WWE contract in 2014 and started competing in the WWE development category NXT. She received her first wrestling – an introductory vignette – in a tag team wrestling match on May 7, 2015. Nia entered the competition with the ring name “Zada” and was tagged with Devin Taylor against Carmella (Leah Van Dale) and Bayley (Pamela Rose Martinez). She lost the fight and fought in other vignettes before changing her ring name to “Nia Jax”.

On October 14, 2015, she made her NXT mark and defeated Evie (Cheree Crowley). The victory spurred her on and she continued her winning streak – including her victory over Carmella in the singles – before entering into a wrestling alliance with Eva Marie, which they called “The Power Alliance”.

Nia Jax continued her impressive performances at the NXT Women Championship on RAW after she was selected for the WWE Draft 2016 on July 19, 2016. This means she would only spend a little over a year in NXT, which was very rare as aspiring wrestlers would spend years developing within the NXT ranks before being given the opportunity to perform on the big stage.

Nia fought (and injured) Britt Baker in her RAW debut at Monday Night Raw in July 2016, and in 2018 challenged Ronda Rousey to a wrestling match that Rousey owed her.

The WWE Star is also a plus-size model that was a source of livelihood before the luck of wrestling began to flow in. Nia used to be ashamed of her body, but she saw that it was a gift when she was approached at an event she attended in California. It was a model event, and one of the judges at the exhibition met her and offered to show her body in a model project for oversized women. She accepted the offer and soon had several photoshoots in bikinis and beachwear behind her.

This experience changed her self-image and made her believe more in herself. Since then she has been an advocate that promotes self-love and body positivity by understanding the challenges she went through when she grew up with a big body. Nia believes that regardless of body type, a positive can be derived from it, and despite her WWE career, she still does her plus-size modeling, which she uses as a weapon to inspire confidence in other women.

Nia Jax’s wrestling career would have been cut short in its heyday had she not survived a fatal accident that occurred on August 2, 2014. She was involved in a head-on collision with another vehicle whose driver was drunk. Nia was in the car with Dwayne Johnson’s mother, Ata Maivia-Johnson (her aunt), and fortunately, no one was killed.

The star suffered few injuries and was released from the hospital a few days later, while the driver was charged with drunk driving (DUI).

Nia Jax is not yet married, but she is in a relationship. Her reports on social media indicate that she is in a love tangle with Josh Woods, who is also a wrestler.

Their relationship seems to be flourishing, and the couple looks happy together from the pictures on Instagram. They have been very open about their relationship, and their fans wish them well. Maybe we will hear wedding bells ringing soon.