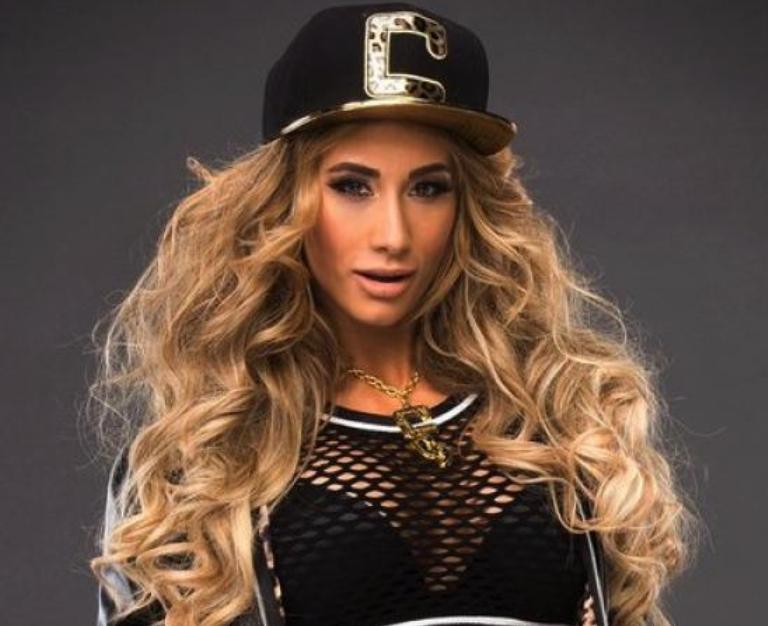 Carmella is an American professional wrestler of the brand SmackDown, a professional wrestling manager, a dancer, model, and former cheerleader of the New England Patriots and the Los Angeles Lakers. On April 10, 2018, she became the WWE SmackDown Women’s Champion. Her career is going so well that it looks like the path she is taking is unstoppable. Read here the very interesting things we have collected about her, especially regarding her relationship with Collin Cassady.

Carmella was born on 23 October 1987 in Spencer, Massachusetts, United States of America, and was known to her parents and relatives as Leah Van Dale. In the 1980s and 1990s, her father was a mixed martial artist, a former wrestler, and jobber in the World Wrestling Federation, now called World Wrestling Entertainment.

She attended David Prouty High School, graduated in 2006, and then went on to study at the University of Massachusetts Dartmouth, where she graduated with a degree in marketing in 2010. While in college, she worked as a professional cheerleader for three seasons with the New England Patriots, which ended in 2010, before auditioning for the Los Angeles Lakers and becoming part of their cheerleading squad for the 2010-2011 American football season.

Carmella signed her first WWE contract in June 2013 and was assigned to the WWE development area NXT. She made her wrestling debut on 16 October against a nameless opponent labeled Blue Pants. She defeated her on 2 occasions, but later lost to her when they fought for the last time on New Year’s Day 2015.

ALSO READ: Rhyno WWE Profile And Everything You Need To Know About The Wrestler

She got involved in a feud that flared up between Amore and Cassady against NXT Tag Team Champions Blake and Murphy. Carmella sided with Blake and Murphy as they battled for supremacy in the NXT Tag Team Championship. But the victory was far from their grasp as they fought to make a name for themselves in the NXT WWE Division. The victory she so desperately wanted for herself had to wait until her last game in the NXT when she participated in a 6 women’s day team match, where Liv Morgan and Nikki Glencross fought against Daria Berenato, Mandy Rose, and her arch-enemy and constant rival Alexa Bliss.

She was drafted to SmackDown in the 2016 WWE draft and had her first win against Natalya in the August 9th episode of SmackDown Live. Carmella’s professional career was not exactly rosy, as she suffered a number of defeats against Nikki Bella, Jonhcena’s friend Lynch and others, against whom she fought as a member of a team.

On 28 January 2018, Carmella entered the Women’s Royal Rumble but would start by losing to Nikki Bella. A few weeks later in March, she won against Naomi and headed for the WrestleMania Women’s Battle Royal.

Husband, And Relationship With Colin Cassady

Carmella and Collin Cassady formed a trio with Enzo Amore in NXT. Since they had to work together, it didn’t take long for Carmella and Colin to fall in love. However, they were separated in their profession when WWE decided to create a separate roster for RAW and SmackDown. So Cass was drafted for RAW together with Enzo Amore, while Carmella was drafted for Smackdown. The separation did not mean the end of their relationship, as they continued to be an item for each other.

ALSO READ: Who is Tyler Grosso? Here is Everything You Need To Know

However, some online reports in January 2018 stated that the two were no longer together and stated that Carmella had deleted all her photos together from her Instagram account. Although the news of their separation may not have been substantiated by a comment from either of the two NXT couples, it is believed that they are indeed no longer an item, as their Instagram posts contained no references or expressions of love or feelings for Colin Cassady, also known as Big Cass.

It appears that Carmella is not yet married and there seems to be no indication that she will be soon. When she does, we will let you know who her husband is.