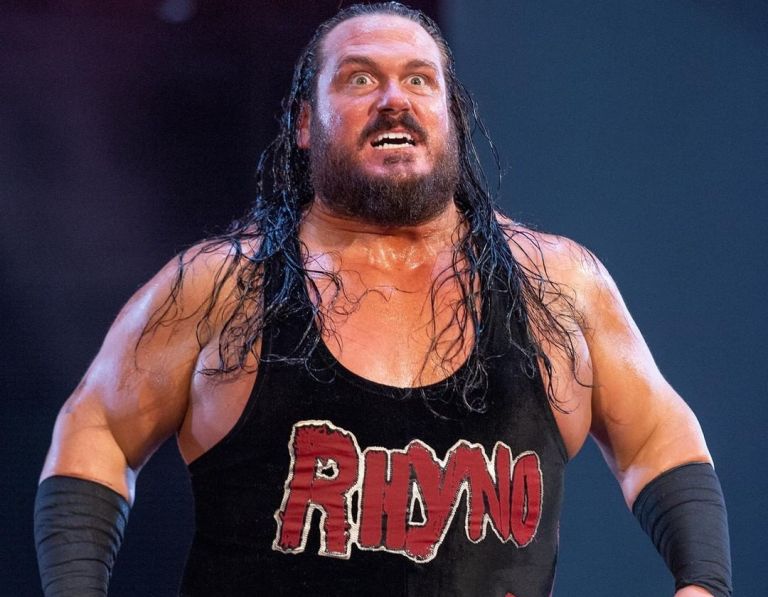 Rhyno is not only a wrestler but also a politician and actor. However, he owes his fame to his heroic deeds in the wrestling ring. He has participated in various franchises such as WWE, ECW, TNA, WCW, and ROH (Ring of Honor).

The human beast, as he is called, is famous for his fighting style – the gore – in which he pierces his opponents like a raging beast. After his success in the ring, Rhyno tried his hand at politics at the Michigan state level, but his application was unsuccessful. He is currently wrestling in the WWE on the show Smackdown Live!

Rhyno was born Terrance Guido Gerin on 7 October 1975 in Detroit, Michigan. He grew up in Detroit, where he lost his father, Rhyno was only fourteen years old. He stayed behind with his mother, who struggled with the family as she had three jobs to provide food for Rhyno and his two other brothers, Jim and Ron Gerin.

His website (which was removed after the 2016 election, in which he ran for and lost in the Michigan State House of Representatives) stated that his grandparents were Italian immigrants who moved from their country (Italy) to the United States and settled in Dearborn in 1953.

As they grew up, Rhyno and his brothers looked forward to spending weekends at their grandparents’ home in Dearborn, eating homemade Italian meals, and watching wrestling matches on television. There his love for the sport grew and he hoped to become a wrestler one day. Not everything was rosy at home, and he did small jobs like delivering newspapers and working in restaurants while he went to school, all in an effort to support his mother.

The WWE star attended Annapolis High School in Dearborn Heights, where he played football for the school’s football team. He also joined the school’s wrestling team. During high school, Rhyno’s love of wrestling grew stronger and stronger, which inspired him to give up football after high school and take up wrestling training as he tried to turn this sport into a career. He enrolled at the Can-Am Wrestling School in Windsor, Ontario, where he was coached by Scott D’Amore.

The Michigan-born wrestler began his wrestling career from the ground and has been steadily rising through a career spanning over twenty years. He first fought for independent circuits in Canada in 1994, where he met and became friends with Edge (Adam Joseph Copeland) and Christian (William Jason Reso). At that time he fought with the ring name Terry Richards. From 1998 to 2001, after signing up for the Extreme Championship Wrestling (ECW), Rhyno achieved national success in the ECW, where he fought and defeated long-time icons and famous names such as The Sandman and Raven.

In 2000, he won the ECW television championship after defeating Yoshihiro Tajiri – a title he held for a while as he successfully defended it against Spike Dudley, Mikey Whipwreck, Rob Van Dam, Jerry Lynn, and New Jack. Rhyno earned the nickname “The Man Beast” for the way he eliminated his opponents. He made history in April 2001 when he defeated “The Sandman” and won the heavyweight world championship in addition to the television world championship he hosted. This made him the first ECW wrestler to win both championship titles. When the ECW ended in the same month, Rhyno made his debut at the WWE, where he joined his old friend’s Edge and Christian (together with Kurt Angle) to form Team RECK.

He fought Chris Jericho because he disgraced Stephanie McMahon and defeated him in honor of the ECW owner. After working in Total Nonstop Action (TNA) wrestling, Juggalo Championship Wrestling (JCW), New Japan Pro Wrestling (NJPW), Resistance Pro Wrestling (RPW), Universal Championship Wrestling (UCW) and other independent circuits, The Man-Beast returned to WWE in 2015 and wrestled in NXT with an unexpected performance. On his debut, he defeated Elias Samson with gore and remained a force to be reckoned with until 2016, when he moved up to the main list. He later signed up for SmackDown LIVE and formed a deadly tag team with Heath Slater to become the first SmackDown tag team champion ever.

Everything You Need To Know About Rhyno

Aside from wrestling, Rhyno has dabbled in American politics. He announced his intention to run for a seat in the Michigan State House of Representatives on March 4, 2016 – a seat representing Dearborn and Dearborn Heights, Monroe, Taylor, Romulus, and parts of Ann Arbor.

The wrestler was inspired to run for office after then-incumbent George Darany of the Democratic Party was unable to seek reelection after he exhausted the constitutional term limit. He got off to a good start when he won the Republican primary and defeated politically inclined Republican party members when the results were announced on August 2, 2016.

Rhyno’s passion for politics was, in his opinion, tempered by his quest for better funding for the 15th anniversary of the Republican Party. He said that while money was not the problem, it needed to be directed to areas of need, such as places that desperately needed better roads. He also highlighted the problem of giving teachers more freedom to carry out their classroom duties. As can be read on his website, which no longer exists today, Rhyno’s motivation to go into politics was his “love for the world and American history”.

In the November 2016 polls, however, he had to admit defeat. While the Democratic candidate, Abdullah Hammoud, received a total of 18,097 votes in the elections, he (Rhyno) lost a total of 9,999 votes – and thus lost by a fine margin of 8,098 votes.

Information about his married life is very close to Rhyno’s chest, with very sparse details here and there on the Internet. We do know, however, that Rhyno was married, although it does not seem to be the case now. Sources show that Rhyno was married to Mirja Gerin in 1997. Details of their marriage are not known, but we know that there was a marriage at some point.

According to WWE sources, Rhyno was fired from the franchise in April 2005 because he had a verbal exchange with his wife backstage that resulted in him hitting a potted plant on the floor. This proves that he was still married at the time. And he talked about the incident in several interviews, mentioning that he had filed for divorce and had an emaciating legal battle for custody. A “custody battle” would suggest that there was at least one child from the marriage which has now been annulled because he constantly refers to the fact that he is friends with his “ex-wife”.

No name is given for his children (if there are several) and there is no indication that he is remarried or in any other relationship. It is, therefore, safe to say that Rhyno is divorced and currently single.

Quick Facts About The Wrestler