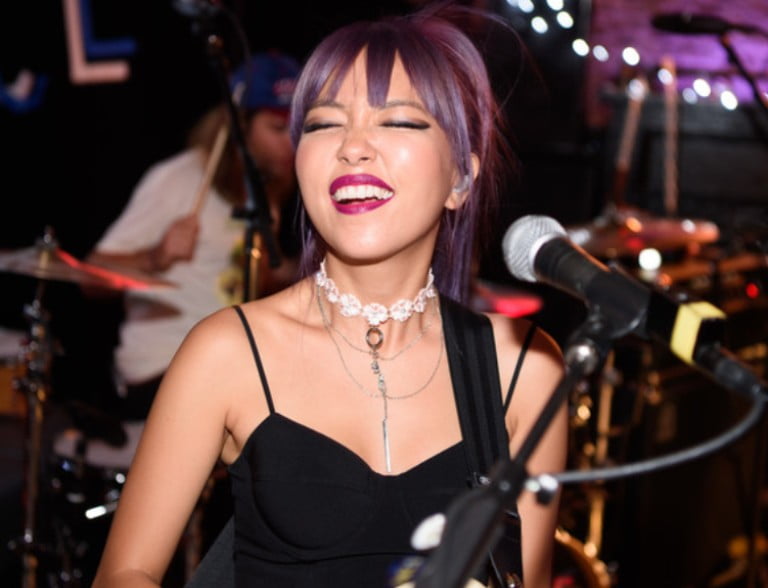 JinJoo Lee is a South Korean pop-rock guitarist and singer who is part of the pop-rock band DNCE. Lee is one of the few talented guitarists in the country and has played alongside other superstars like Jordin Sparks and JoJo. Their story is an incredible rise from nothing to the highest level of the music industry.

JinJoo Lee was born on November 15, 1987, in Incheon, a city in the northwest of South Korea. She is of Korean descent and has South Korean nationality. There is little or no information about her parents or siblings, except that she has a younger brother, Yongwon Lee. We also know that her love of music must have been inspired by her family, as she learned to play the guitar all by herself at the age of 12 in order to play in the family band. However, the name of the family band remains unknown. Since she was not satisfied with music at this level, she moved to Hollywood, Los Angeles, and left home for the first time at the age of 19. In order to really fit into the new culture she was in, she learned to speak English and found herself at the Hollywood Musicians Institute.

Since then, her career has skyrocketed and she has performed alongside Hollywood’s best musical talents such as Charli XCX, Jordin Sparks, JoJo, Cee Lo Green (with Scarlet Fever, an all-female support band for promotional events), etc. She is now the guitarist for the band DNCE.

Currently, JinJoo Lee is a member of the rock band DNCE – the only female member of the 4-man band in which she is the guitarist. DNCE was founded in 2015 by Joe Jonas, Jack Lawless, and JinJoo Lee. The name “DNCE” is actually a coinage from the word “dance”, which was the title of a song they worked on in their debut album. The group currently consists of Joe Jonas – lead singer, Cole Whittle – drummer, Jack Lawless – keyboardist (also plays the bass guitar), and JinJoo Lee – guitarist.

On September 18, 2015, they released their first single “Cake by the Ocean”, which crawled into the Top 10 on the Billboard Hot 100 and the Canadian Hot 100. On October 23rd, 2015 they released their debut EP and in November 2015 they went on their debut tour, which they called “The Greatest Tour Ever”. They announced that they would release their first studio album in November 2016, and on November 18, 2016 DNCE was released as promised. They released the single Kissing Strangers, on which they collaborated with rapper Nicki Minaj.

JinJoo Lee loves the guitar and has turned it into a profession. After refining her guitar skills in special guitar courses, she was able to prove her acquired skills in 2009 alongside Grammy-nominated singer Jordin Sparks. This opportunity brought her fame, and later that year she went on tour with the American pop-rock band The Jonas Brothers. Between 2010 and 2011 she toured with American singer and rapper Cee Lo Green as part of “Scarlet Fever”, an all-women band. She also played guitar for artists such as the British singer Charli XCX and the American singer JoJo.

The sexy guitarist JinJoo Lee is single and not married. She is not lesbian and her sexuality is heterosexual, although she doesn’t even have a boyfriend. Although there are rumors that link her to the DNCE singer Joe Jonas, we can confirm that there is no truth in it. These rumors started in 2016 after they were seen shopping together in a shopping mall, but the truth remains that both parties have confirmed everything (even if they did not deny it). Lee’s vibrations seem to indicate that she is focusing on her career and does not want to be distracted by relationships at the moment.

Other Facts About JinJoo Lee

1. JinJoo Lee is about 160 cm (5 feet 3 inches) tall and weighs about 51 kg. She loves to experiment with her hair, which has taken on several colors at different times.

2. In 2017, Lee and her band members became ambassadors for the tennis shoe brand “K. Swiss”.

3. JinJoo Lee is the only girl in the four-piece DNCE rock band and she loves that fact.

4. She has performed with big names in the music industry including JoJo, Jordin Sparks, Charli XCX, etc.

5. DNCE is not the only band of JinJoo Lee. She was a former member of an all-female band, Scarlet Fever.

6. Before DNCE she knew the lead singer Joe Jonas. They met in 2009 when she was on tour with the American pop-rock band The Jonas Brothers.

7. You can rarely see Lee without sunglasses, as you can see from the different kinds of sunglasses she wears all the time, even on stage.