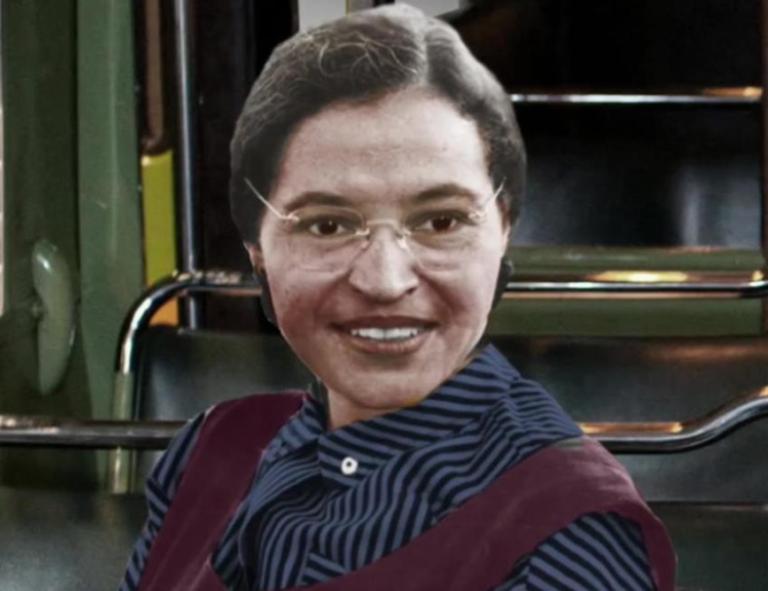 Increasingly, women who are not afraid to fight for a course they believe in are given a healthy dose of respect, especially if it is a noble course. Rosa Parks was one such woman, an African-American who, sitting down, fought for the rights of the entire black race in America.

Today Rosa Parks is recognized as the mother of the modern civil rights movement throughout America and the world. Her refusal to give up a seat she paid for to a white male passenger in 1955 sparked a fierce protest that shook the United States and changed America’s view of colored people and also changed the course of history

Rosa Louise Parks, popularly known as Rosa Parks, was born on February 4, 1913, in Tuskegee, Alabama. She was born Rosa Louise McCauley but changed her name to Rosa Parks when she married a man named Raymond Parks, a barber from Montgomery, in 1932. Rosa’s mother Leona Edwards McCauley worked as a teacher, while her father James McCauley was a carpenter.

It is recorded that Rosa attended local schools in the countryside, and after she turned 11, she went to the Montgomery Industrial School for Girls and later to the Alabama State Teacher’s College High School. Unfortunately, she had to drop out of school to care for her sick grandmother, and eventually, her own mother became ill, and Rosa had to give up all hope of completing the teacher training she received.

Rosa Parks gradually became aware of the racial segregation that was deeply rooted in her hometown of Alabama. As a growing child, the human rights activist experienced deep-rooted racism, and it occurred to her that black and white people had different opportunities in life.

Her husband Raymond Parks encouraged her to graduate high school in 1933, and later she joined the Montgomery Chapter of NAACP (National Association for the Advancement of Colored People) and became actively involved in civil rights issues in 1943. During her time with the NAACP, she served as the youth leader of her chapter and later as secretary to the NAACP president. The human rights activist eventually became heavily involved in fundraising and other initiatives affecting the chapter. She always attended meetings to prevent injustice and protect the rights of colored people.

Rosa’s action in a bus triggered the famous Montgomery bus boycott in 1955 when she refused to give up her seat to a white man. Her action led to her arrest and a trial in which she was found guilty of an act of civil disobedience and consequently paid a fine, but the bus boycott that followed this event changed the segregation laws in Montgomery and the lives of colored people.

After the successful boycott, which lasted 381 days, Rosa became an icon, a well-known personality, and a leading spokesperson on civil rights in the United States. Although she lost her job at the department store and had to survive for years as a seamstress, she did not let herself be discouraged but continued the fight against racism.

Rosa was later hired by the African-American US representative John Conyers and worked as his secretary until her retirement in 1965.

When and How Did She Die? Here are the Facts

The human rights activist died in her Detroit, Michigan apartment on October 24, 2005. In 2004, Rosa was diagnosed with progressive dementia, which seems to have been present since 2002.

It is known that Rosa died at the age of 92 in her apartment while reading the newspaper between 7 and 8 pm. The cause of death was recorded as natural causes.

Rosa’s funeral was a phenomenal funeral that was marked by several commemorative ceremonies: Her body was laid out in the Capitol Rotunda Washington, D.C., and it is on record that more than 50,000 people from all walks of life came to see her coffin.

She was buried at Woodlawn Cemetery in Detroit in the chapel mausoleum, and her final resting place was between her mother’s grave and her husband’s. Not long after her funeral, the chapel changed its name to Rosa L. Park’s Freedom Chapel in an effort to immortalize her name.