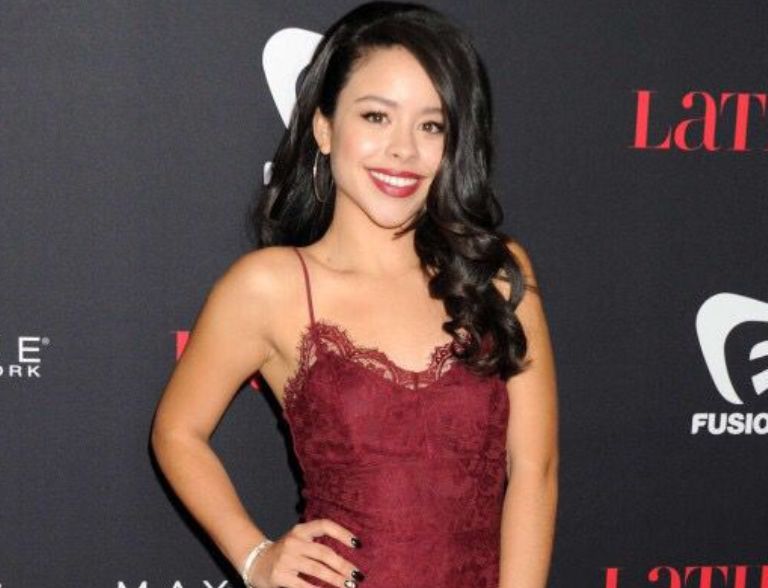 Cierra Ramirez is both a musician and an actress, and in her case, it was her singing talent that paved the way for her career in front of the big screen. The petite beauty has worked with big names and played major roles in movies and television series such as “Girl In Progress”, “The Fosters” and “The Secret Life of the American Teenager”.

Since the beginning of her acting career in 2005, Cierra has participated in more than 16 film and television projects. And she has shown that she is capable of juggling this with an aspiring music career.

Cierra was born on 9 March 1995 in Houston, Texas. Her vocal genes and her general love for music definitely come from her father. Cierra Ramirez’s father earns his living as a music producer and consultant, while her mother teaches kindergarten classes. Ramirez’s beauty has an unmistakable Latina flavor, thanks to her Colombian and Mexican heritage from her father and mother respectively. She also has a sister, Savannah.

Cierra had no financial difficulties when she was growing up in a well-funded household. By the age of 6, she had already acquired sufficient knowledge of fashion and modeling, which was sufficient to start participating in fashion shows at this tender age.

When she was old enough, she completed the first two years of her high school education at Westside High School in Sugarland, Texas, and was taught at home in Los Angeles for the remaining two years. This was done to give her time to start building her career.

Cierra Alexa Ramirez could already sing at a very young age. It was her vocal talent that introduced her to television at the tender age of 10. She lent her singing talent to the music television show Showtime at the Apollo. This happened in the show “Apollo Kids Star of Tomorrow”, where she sang “I Am Changing”.

Her appearance on the Apollo opened further doors for her, and in 2006 she made her acting debut when she appeared as Isabel Terraza in an episode of the extremely popular CSI: Miami entitled “Deviant”. In the same year, she made further appearances in one episode each of Zoey 101 and Desperate Housewives. She also played the role of Marisol in the 2006 drama All In.

The following year she was Jasmine in four episodes of The Suite Life of Zack and Cody and Stella Rivera in the comedy Star and Stella Save the World.

2012 was a particularly fruitful year for the young actress. The role of Ansiedad, a headstrong, attention-grabbing 14-year-old in the film Girl In Progress, was her biggest role to date. Her next project was The Secret Life of the American Teenager. She joined the series in 2012 in its 100th episode and played Kathy for 22 episodes, culminating in 2013.

In 2013 she got a role as Mariana Foster in the ABC Family drama series The Fosters, which eclipsed her success with Girl In Progress. By June 2018, Cierra had appeared in over 100 episodes of the series.

Cierra Ramirez also sang the character America Chavez in the 2018 animated action-comedy Marvel Rising: Secret Warriors. She also began work on her first project as executive producer Good Trouble, an offshoot of the successful series The Fosters, which was completed in 2018. Here she resumes the role of Mariana Foster.

In addition to her acting career, the actress is also building her music career. In the years before her first studio project, she signed a music contract with the Tribeca Music Group. Cierra Ramirez also performed as an opener for major bands such as Chicago and Earth Wind and Fire, as well as iconic soloists such as Rubben Studdard. In 2016 she finally released her long-awaited project. It was an EP called Discreet.

The “Girl In Progress” actress does not try to hide the fact that she thinks she has the best friend money can’t buy, and maybe she does. Cierra has been dating Jeffrey Wittek since March 2015.

ALSO READ: Who Is Damian Jones? 6 Interesting Facts About The NBA Player

Jeffrey earns his living as a hairdresser and barber. In his time he took care of greats like Big Sean and DJ Pauly D. When Vine was still a thing, Wittek ran a Vine account under the name “American Jeff”. He moved to LA with his dog Nerf and appeared in a short film with Cierra in 2015.

Cierra Ramirez always talks about how compatible and crazy they are with each other. She keeps posting pictures of her and Jeffrey on her Instagram account, and it looks like they are made for each other.