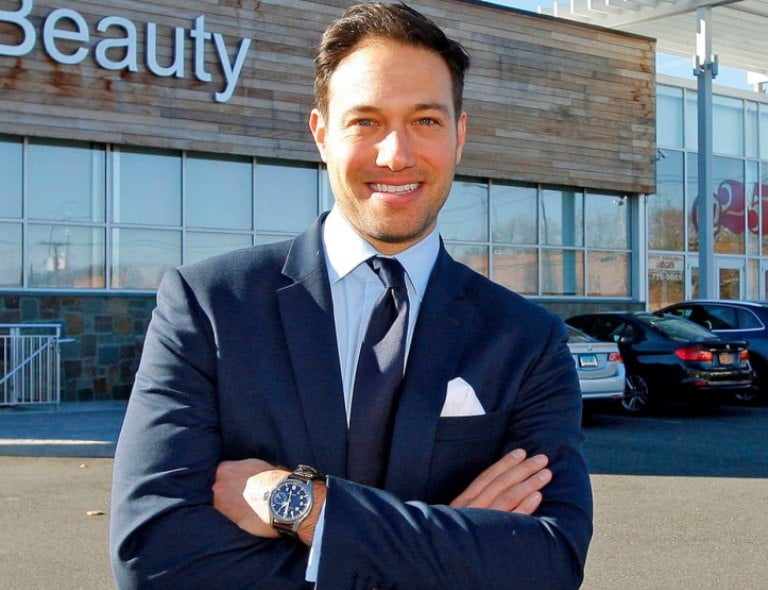 Eric Villency is an American interior designer and a successful businessman. He came into the spotlight when he married Kimberly Guilfoyle of Fox News Channel. Eric is the Chief Executive Officer of Villency Design Group, a product and interior design company based in the United States.

The young and talented CEO has won several awards since the beginning of his career. In 2001 and 2007, he was honored with the FIT All-Star Salute Award and received the IFDA Design Industry Award after creating a custom design and manufacturing workshop called Villency Atelier for design professionals.

Let’s take a brief look at the life of the successful American businessman and designer.

Eric Villency was born on June 10, 1975, in New York City, New York in the United States, into a family with a successful business background. He was raised by his parents Rowann Villency, a mixed media artist, and his father Robert Villency, the chairman of Maurice Villency, a design firm founded by his grandfather Maurice Villency in 1932. Eric is a well-educated fellow; he graduated with honors from the University of Wisconsin.

When he left the University of Wisconsin, Eric started his career as a businessman and interior designer, took over the family business, and took it to the next level. In 1998 he was appointed CEO of his grandfather’s company, the Villency Design Group. His immense contribution has led to various successes that the multinational company has enjoyed to date.

His company was recognized as a leader in design and fashion in 2001, and in 2002 it began to expand with the opening of the Maurice Villency flagship store for home accessories collections. The store is located in Midtown, Manhattan, and four years later, in 2006, Eric opened another design and manufacturing workshop called Villency Atelier. In 2008, the talented businessman started the business producing and selling pure design furniture collections. To this day it remains one of the leading companies in the American furniture industry.

In addition to his business, Eric has also sponsored several projects, including the Giuliani Urgent Care Unit at St. Vincent’s Hospital, an office for Kathy Lee Gifford, the Bryant Park Hotel, and an indoor fitness cycle called SoulCycle, to name a few.

He has been a regular guest on numerous television shows, including The Tyra Banks Show, Good Morning America, Today Show, and Travel Channel. Eric is the host of the Fine Living Channel’s iDesign show and currently producer and host of the documentary series for emerging fashion designers, INSEAM.

He has also contributed to Huffington Post’s best features on Life, Women’s Health, Departures, and others. He has also worked as a model; in 2007 he created a fashion brand called Restoration of the Monarchy with Carine Roitfeld as the face of Purple Magazine, which promotes the brand.

Since the beginning of his career as a businessman and interior designer, the star has had numerous successes. Eric has amassed a great deal of wealth through his business ventures and currently lives a wasteful lifestyle.

However, his net worth cannot be determined at the moment as it is still under review. We hope to keep you informed as soon as we have verified the information.

His Relationship with Kimberly Guilfoyle

Eric married Kimberly Guilfoyle, the legal analyst for Fox News Channel, on 27 May 2006. It was Kim’s second marriage and Eric’s first. The couple’s wedding ceremony took place at the Sandy Lane Resort in St. James Barbados. The marriage between the successful interior designer and the Fox Channel TV star lasted three years before they went their separate ways.

However, Eric and Kim had a son from their marriage. Their son, whom they named Ronan Anthony, was born on October 4, 2006, and after their separation, the couple received equal custody of their son. The reason for their divorce was also not disclosed by either party.

Are you wondering if Eric is married or not? The answer is not far-fetched. The handsome businessman has been married twice and has been divorced twice to date. His first marriage was to Fox News Channel’s legal analyst Kimberly Guilfoyle, but the couple divorced in 2009. Later, in 2013, he married Caroline Fare, a Swedish designer. Their wedding ceremony took place in West Palm Beach in Florida, United States. His second marriage lasted four years, however, and in 2017 the couple parted ways. They had no children from this marriage. Eric is currently single and is not currently in a known relationship.