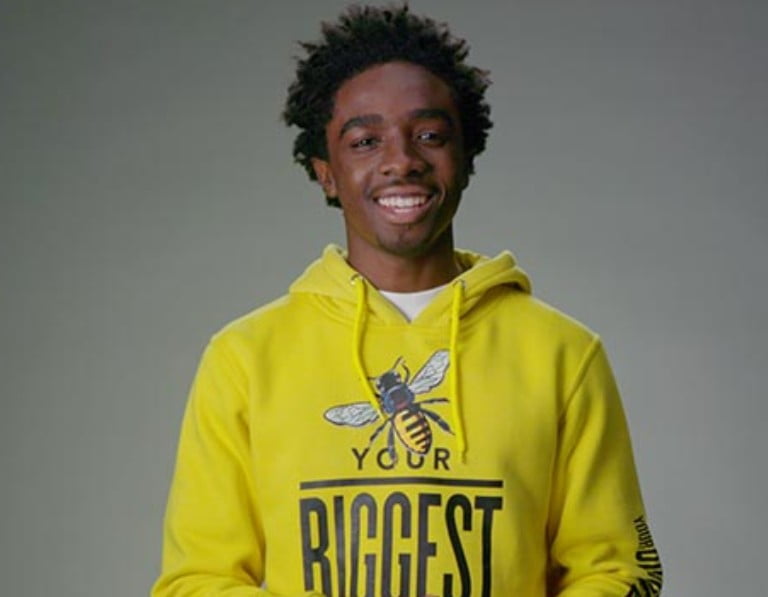 Caleb McLaughlin is no stranger to fans of the Netflix 2016 hit series Stranger Things. Although he became an international star after his portrayal of Lucas Sinclair, one of the main characters in the blockbuster series, the young American actor actually began acting on the Broadway stage, where he appeared in the musical The Lion King. From 2012 to 2014 he played the role of young Simba in the Broadway theater production.

For his outstanding performance in Stranger Things, Caleb Mclaughlin has been nominated for at least five prestigious awards and has won two. He is one of the few children who know from the cradle what they want to be in life, and he has worked hard to achieve this. Despite the fact that the young lad is growing up right before our eyes, there are a lot of interesting facts that most people don’t know about him.

Who Is Caleb Mclaughlin? His Bio, Age

As it looks, the star of “Stranger Things” could be the next big thing in Hollywood, if his exploits in his formative years are anything at all. The talented actor was born on October 13, 2001, and grew up in his birthplace Carmel, a small town in New York, USA. His parents April (mother) and Corey McLaughlin Sr (father) raised him together with three others. He has two sisters, Caitlyn and Crystal, and a brother known as Corey McLaughlin Jr.

He received his early education at Kent Primary School, from where he transferred to George Fischer Middle School, where he spent a year. After his fifth grade, the budding star took the bold step of moving to New York City to explore the horizons of the entertainment world. During his stay in NYC, he took a year to study dance at the Happy Feet Dance School in Carmel, NY. Later he transferred to the Harlem School of the Arts, where he studied with Aubrey Lynch, the former producer of Lion King.

At the beginning of his acting career in 2012, Caleb McLaughlin made his debut in the short film Noah Dreams of Origami Fortunes, and shortly after his debut, he was given the role of young Simba in the musical The Lion King (2012 to 2014), which will be performed at the Minskoff Theatre. He also appeared in Law & Order: Special Victims Unit (one episode), Unforgettable, Forever, and What Would You Do? (one episode).

He appeared in the above-mentioned between 2013 and 2015 and continued until 2016, hitting the jackpot with his portrayal of Lucas Sinclair in the Netflix hit series entitled Stranger Things, which is probably his biggest number to date. The series not only earned him recognition in prestigious awards but also put his name on the world map. In 2016 he also played small roles in the television programs Shades of Blue and Blue Bloods.

Some of his most recent appearances include the role of Ricky Bell in the mini-series The New Edition Story and two music videos, all in 2017, and in one episode he also lent his voice to the character of Young Gary in the television series Final Space. At the moment Caleb McLaughlin seems to be busy filming some new projects.

With a hit series and several other films under his belt, the young actor undoubtedly smiles into the bank often. Although it’s not entirely clear at the moment how much he’s worth, a few pages have set it at $3 million, while some others say it’s $0.7 million. Nonetheless, Caleb McLaughlin seems to know his onions, and it will come as no surprise that he will make millions in the near future.

Height And Other Facts About Caleb McLaughlin

Besides acting, the young star is also a trained dancer.

He is a very charming and friendly person and is always happy to entertain his fans with dance performances.

He has appeared in films, on television, and in music videos.

Caleb has received a Screen Actors Guild Award and an NAACP Image Award for his performance in Stranger Things.

He lives with his family – parents, two sisters, and a brother.

He is currently 5’6″ tall and is expected to continue to grow as he is still a teenager.