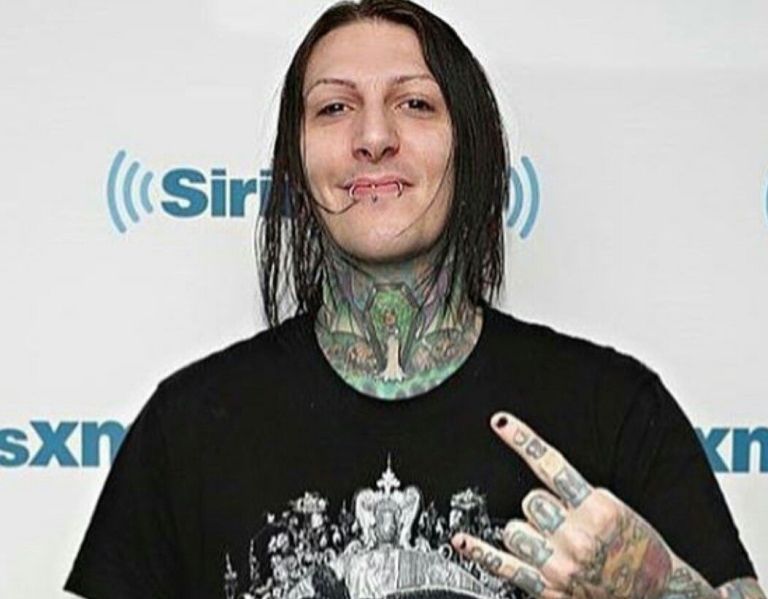 If you are familiar with the band “Motionless in White”, then you must have taken note of Chris Cerulli. He is one of the band members and has a gothic dressing sense, long hair, and a fully tattooed body. He is the lead singer and also plays guitar. Many people wonder about his background and personality. Some even call him crazy because of his tattoo and make-up. Let us find out more about this interesting personality.

Who is Chris ‘Motionless’ Cerulli? – Age

Chris Motionless, born Christopher Thomas Cerulli, is an American musician and was born in Scranton, Pennsylvania, on October 17, 1986. He has a brother who works with her father in his workshop and a sister who still goes to school. There is no information about the names and professions of his parents or siblings, nor about his educational background. Chris had a troubled childhood as he grew up, as his parents were constantly arguing and fighting about problems. Later they divorced, which led Chris to seek comfort in what he had a passion for, namely music.

Chris Cerulli loves to sleep, relax, watch movies, and TV shows in his spare time, and he also likes hanging out with friends but hates social networking. He likes people to be afraid of him or avoid him because he can be alone in this way. Although Chris looks crazy, he is a non-alcoholic and loves to stay away from anything that makes him look bad or gets him into trouble.

He worked in a tattoo shop and learned to become a piercer, but he couldn’t finish the learning process because his band started to do well and they had to spend more time and effort to get fame. For Chris Cerulli, music is life, he has been a music lover since his school days, and when he entered high school, his interest in music grew.

ALSO READ: Who Is Caleb Mclaughlin? His Age, Height, Net Worth, Bio, Other Facts

He is co-founder of the band “Motionless In White”, which was formed in 2005. The group was formed by Chris Cerulli, Angelo Parente, Kyle White, and Frank Polumbo, with Chris playing the guitar and being the lead singer. The group currently consists of six members, with so many of the original members retiring that Chris, who is still the oldest member of the band, is leaving. Other current members are Ricky “Horror” Olson (rhythm guitarist), Devin “Ghost” Sola (bassist), Ryan Sitkowski (lead guitarist), and Vinny Mauro (drummer). Chris and his band started out playing in nightclubs until they were discovered by a producer named Zach Neil, who signed them to his record label “Masquerade Recordings”.

Their first Extended Play (EP) entitled “The Whorror” was released in June 2007. That year they toured the country (United States) and wrote songs for their album, which was finally released in 2009. The album was entitled “When Love Met Destruction”. Their first single entitled “Ghost in the Mirror” was a hit and this encouraged the band to record their first studio album entitled “Creatures” in 2010 and the album debuted at number 6 on the Billboard Heatseeker Music Chart. The second and third albums were entitled “Infamous and Reincarnation”, while the fourth was called “Graveyard Shift” and was released in 2017 on Roadrunner Records.

Chris Cerulli is crazy about tattoos, so his whole body is covered with tattoos and piercings, and he also loves the extreme use of make-up. He gets tattoos all over his body for Halloween, with the words Lost Boys and Kiss Kiss tattooed on his knuckles. He weighs 75 kg (165 lbs), which corresponds to his height of 185 cm (6 ft 1 in). Chris has brown eyes and long black hair.

Chris Cerulli believes in monogamy and has expressed this in various interviews. And although he says that he is not a playboy and that he has respect for himself, he believes that premarital sex is not a bad thing. There was a rumor that Chris was dating his childhood friend Sabrina Malfoy in 2013, but their relationship didn’t last long. He is currently dating an Instagram personality who wears the Twitter handle @Gaiapatra. She is an alternative punk visagist who presents her artistic talent through Instagram. They worked together for the cover of Alternative Press for Warped Tour, where she was his make-up artist. The couple seems to be made for each other, as they both have a similar way of life.

ALSO READ: Is Tupac Shakur Dead or Alive, Who Are His Kids, His Net Worth and Family?

According to unchecked reports, Chris is said to have a daughter, which he is said to have fathered at the age of only 20 years with his girlfriend at the time, who is simply known by her first name Carlie. The name of the daughter they fathered together is Riley Cerulli.