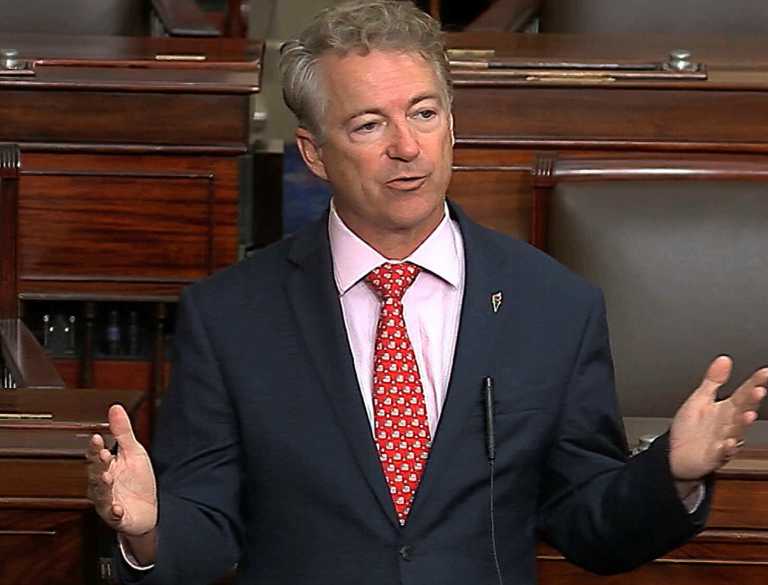 Rand Paul is the son of an American doctor who became a politician. He became a doctor himself and later a politician and now serves as a junior senator of the United States of Kentucky. Here you can learn more about him, his political career, his family, and how much he is worth.

Rand Paul, whose full name is Randal Howard Paul, was born on January 7, 1963, in Pittsburgh, Pennsylvania, in a Christian home run by Ron Paul (father) and his wife Carol (nee Wells) Paul.

Rand was born as the middle child of his parents’ five children. His siblings include Ronald Ronnie Paul Jr., Lori Paul Pyeatt, Robert Paul, and Joy Paul-LeBlanc. When Paul was an infant, his family moved from Pittsburgh to San Antonio, Texas, where they eventually settled in Lake Jackson.

He attended Brazoswood High School, where he was an active member of the school’s swimming team and played as a defender for the football team. After high school, the Pittsburgh native enrolled at Baylor University and was there from 1981-1984. During his time at the university, he joined the university’s swimming team and became a member of the NoZe Brotherhood, a collegiate secret organization that started out as a joke. Rand Paul, however, left Baylor without completing his studies. He was later admitted to his father’s alma mater, Duke University School of Medicine, where he graduated in medicine in 1988 and completed his residency in ophthalmology in 1993.

Rand Paul began his medical career with a position with John Downing at Downing McPeak Vision Center, which is why he moved to Bowling Green, Kentucky. He worked there for five years before moving to the Graves Gilbert Clinic, where he stayed for the next ten years before eventually starting his own private practice. Paul specialized in cataracts, LASIK procedures, corneal transplants, and glaucoma surgery.

From his philanthropic side, he has performed free surgery for children in developing countries through the Children of the Americas program. Paul also founded the Southern Kentucky Lions Eye Clinic, which provides eye care for people who cannot afford to have eye exams or eye surgeries.

During his time at Baylor University, Rand Paul showed signs that he would take the path of politics later in life. First, he became the leader of the Young Conservatives of Texas, and in response to the tax increase by then-President Bush, he founded the North Carolina Taxpayers Union in 1991, followed by the Kentucky Taxpayers United (KTU) in 1994, an anti-tax organization he created in 1994.

In 2008, he made himself popular with American voters when he ran for the US Senate as a Republican on November 2, 2010, and defeated Attorney General Jack Conway. He was sworn in on 5 January 2011 and has been a US Senator since then. Rand Paul has made productive contributions at various times as a member of the Committee on Energy and Natural Resources, the Committee on Health, Education, Labor and Pensions, the Committee on Homeland Security and Government Affairs, including Small Business, and the Committee on Foreign Relations.

On 7 April 2015, he announced his intention to run for U.S. president, but after finishing fifth out of 12 Republicans running for office in the Iowa Caucus on 3 February 2016, he announced the suspension of his campaign. From then until today, Rand Paul has served well as a US Senator.

His Family – Father, Wife, and Son

His father Ron Paul was a US politician who represented Texas in the House of Representatives and also ran for the seat of the US presidency three times without success. He was born on 20 August 1935 in Pittsburgh, a suburb of Green Tree, Pennsylvania.

He trained as a physician at Duke University School of Medicine, graduated in 1961, did his medical internship at Henry Ford Hospital, and completed his residency in obstetrics and gynecology at Magee-Women’s Hospital in Pittsburgh. He began his career in the military before opening his private practice in obstetrics and gynecology in Texas. Ron entered politics in 1971 and served in Congress from 1976 to 1977, 1979 to 1985, and finally 1997 to 2013.

Like most men his age, Rand Paul is a married man with children. He married Kelley Ashby Paul on October 20, 1990, and their marriage produced three children – all boys. Their first son William was born in 1992, and five years later (1997) Duncan Paul was born. The youngest of the three children, Robert Paul, was born in 2000.

Kelley Ashby Paul was born on September 3, 1963, in Russellville, Kentucky, into a military family led by Hilton Ray Ashby and his wife Lillian (Wessell) Ashby. As she grew up, her family moved around a lot and she even lived in Turkey for a time.

Kelley graduated from Russellville High School before moving to Rhodes College where she studied Communications and English. She met her husband in Atlanta in 1988 while he was studying medicine at Duke University School of Medicine. The two developed a fondness for each other, and she even had to move with him to Durham after he graduated from Duke University.

Since their marriage, they have lived together as a happy family and would probably continue to do so without taking the path of disagreement.

The current net worth of Rand Paul is not known exactly. Some sources have reported a net worth of about $2.5 million, while others report slightly different figures.

For 2015, however, a net worth of about $1.3 million is generally assumed. So if you extrapolate on the basis of this figure, you could still arrive at a figure that is no different from what was previously estimated as his current net worth.

The former doctor and current politician Rand Paul stand at a height of 5 feet 6 inches.