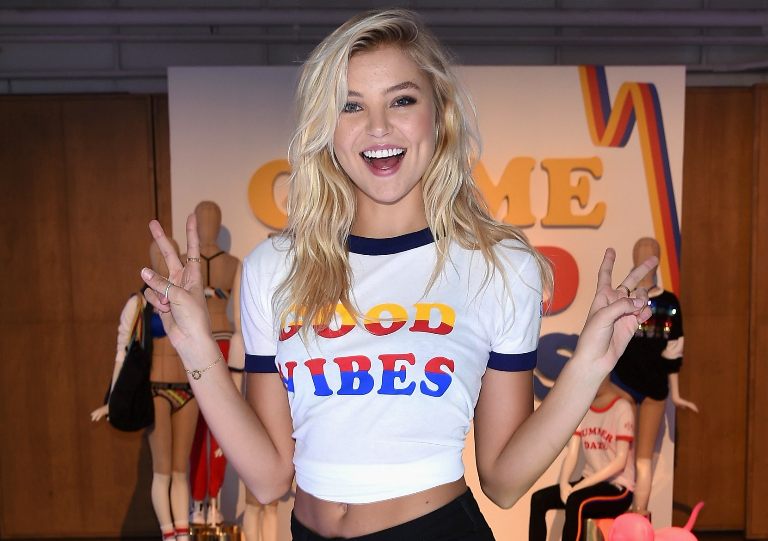 Rachel Hilbert has achieved so much in her modeling career in such a short time. She has already worked with industry giants like Gigi Hadid. The dimpled beauty earned her big breakthrough in 2015 when she was signed as spokesperson and face of the younger line of Victoria’s Secret, PINK. Let us explore her life and career to date.

Rachel Leigh Hilbert was born on 14 March 1995 in Webster, New York, a suburb of Rochester. A born athlete, as she once described herself, dancing was one of her favorite pastimes when she was young. As she grew older she became more serious and took lessons in a variety of genres, from tap dancing to jazz and ballet. When she was not dancing, Rachel was found skiing in the snow.

She was so good at skiing that she even attended her high school, Webster Thomas High School, where she would graduate in 2013. Rachel danced her way through life, often being told how tall she was and having the perfect body for a model. In her second year of high school, she decided to give modeling a chance.

The good news was that her mother supported her choice and even accompanied her to New York for spring break to apply for jobs at some New York modeling agencies. Rachel proved to be a natural in front of the cameras and it didn’t take long before she managed to get a berth at one of the agencies. It was during an open call in New York, and she was only 16 years old at the time.

So Rachel started with photoshoots, and two years later Victoria’s Secret called. “…it was probably one of the best things that ever happened in my career,” she said in an interview with Modeliste.

After a first internal photoshoot at VS, she was offered to become the new face of the youth-oriented PINK label. And so Rachel Hilbert made her breakthrough into the mainstream. At this top job, many top media queued up to get a first-hand interview with her. Then she became an angel by spreading her wings first at the Victoria’s Secret Fashion Show 2015 and then at the other shows that followed.

Shortly after her PINK job, Rachel teamed up with Gigi Hadid and Cody Simpson to host a Spring Break PINK event. Rachel now boasts fronting campaigns with big names like Urban Outfitters, Delia*s, Macy’s, and Kohls. She has honored magazines like Cosmopolitan, Marie Claire, Elle, and others.

Rachel has accomplished so much in such a short time. She enjoys traveling the world, taking pictures, and of course, expanding her bank accounts. She also tries out new things. In 2015, she appeared in the second season of the ace television series Younger.

At the time of writing, Rachel Hilbert’s net worth is estimated at $800,000, a figure that is sure to increase if she keeps up with her current pace. We look forward to seeing her on the next Forbes list of the highest-paid models in the world.

Rachel seems to have a soft spot for musicians, and why not, after all, she is a dancer. She triggered rumors of a date in July 2015 when she was spotted on a Miami beach with country singer Brett Eldredge. Before that, she had starred in his music video for Lose My Mind, where she was a nurse and even shared a kiss with him.

The rumors that the two are one thing got even more nourishment when Rachel posted some cute snapshots of herself and the country star on her gram. However, the two remained silent until the rumors had subsided. In an interview with CBS in November 2015, Eldredge confirmed his relationship status as a single.

Part of his statement read: “…But I’m single right now, I’m just taking my time and trying to find the right thing.

Before the rumors that she was with Eldredge, Rachel is said to have dated pop singer Cody Simpson briefly, neither party confirmed the relationship.