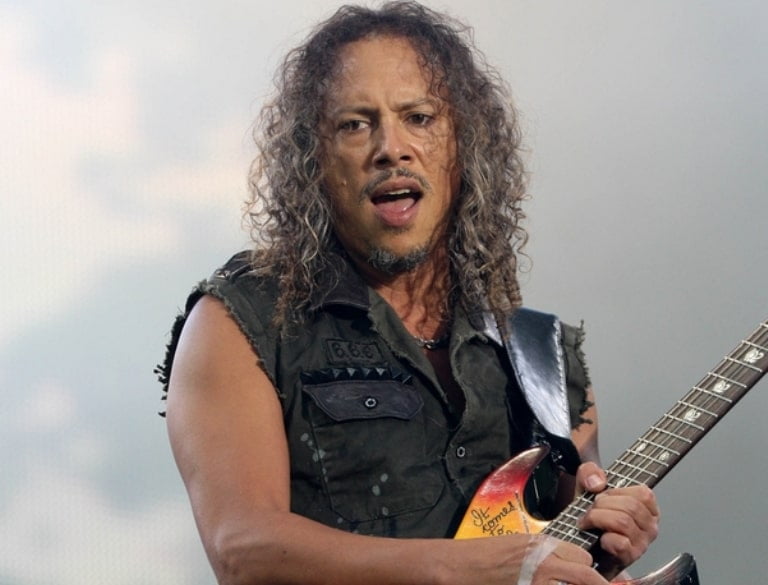 It cannot be denied, Kirk Hammett is a metalhead through and through. It’s not really surprising that his interests have moved towards metal music. Given that his interests shifted from horror movies to Led Zeppelin in his early childhood and youth, his commitment to heavy metal music seems almost like the predictable next step in his development.

Before Hammett’s time with the popular heavy metal band Metallica, he formed a local metal-trash band called Exodus. He was also mentioned in several magazines and publications as one of the greatest guitarists in the history of American music.

Kirk Lee Hammett was born in San Francisco on November 18, 1962, and spent his childhood in El Sobrante, California. During his studies at De Anza High School, he met Les Claypool, who became his lifelong friend and rock colleague.

Hammett’s passions shifted for a while before he concentrated on music. At the age of five, he got into a fight with his sister and sprained his arm. Perhaps to bring him to his senses and distract him from his sister, his parents put him in front of the television. It was at this time, after watching the horror classic The Day of the Triffids from the 1960s, that young Kirk’s fascination with anything that scares began.

He began playing with his brother Rick’s Frankenstein characters and soon spent his own money buying horror magazines. After immersing himself in the world of horror for almost a decade, another of Rick’s possessions caught his attention – his music collection. Here he discovered legends like UFO, Led Zeppelin, and Jimi Hendrix.

Kirk began to sell everything in his horror collection to buy music records. When he was fifteen years old, he concentrated on learning to play the guitar and bought an inferior Montgomery Ward. He soon upgraded to a 1978 Fender Stratocaster copy and then a 1974 Gibson Flying V. He even took on short employment at Burger King. As soon as he was able to buy a Marshall amplifier, he left the company.

His Time With Exodus and Metallica

In 1979, when Kirk Hammett was just 16 years old, he further developed his passion for music and founded his own thrash metal band. This included Paul Baloff, Gary Holt, Geoff Andrews, and Tom Hunting. They became a serious force in the thrash movement of the Bay Area.

In 1983, Kirk was lucky when he received a call from Metallica that he should audition to replace their recently fired lead guitarist Dave Mustaine. He was still taking guitar lessons at the time, but he borrowed some money and flew to New York to audition. His performance was so impressive that he was offered the position locally.

As of 2016, Hammett and Metallica have released ten studio albums. Their first was released in 1983 under the title Metal Up Your Ass. Since their debut album, Kirk has become more involved in the musical development of the group. For their second album, Ride the Lightning, he added a riff that he had written when he was with Exodus. His riffs were used in songs like “Creeping Death” and “Enter Sandman”, the first track of their album of the same name Metallica.

In 1986, while the band was on a support tour in Europe, Kirk Hammet escaped death when, due to a misunderstanding, he handed over his sleeping bunk in the back of their tour bus to bassist Cliff Burton. Early the next morning the band had a crazy accident in which Cliff was thrown through the window of the tour bus and then crushed under the weight of the bus. Although he is grateful to be alive, Hammett says this experience haunts him to this day.

The rocker found time to attend college between 1991 and 1996. This was the time between their fifth and sixth studio albums, Metallica and Load. He graduated from the University of San Francisco with a degree in film and Asian arts and discovered a new love for jazz music and blues. This new influence was evident in his improvisations and solos on Load, Reload, and the two albums that followed. Since then, he has refrained from incorporating most of these influences into the band’s music in order to maintain their integrity as a heavy metal rock band.

Kirk Hammett’s band has shown periods that make fans believe they are a family and not just another band. During the recording sessions of St. Angers in 2001, the group stopped recording to give their frontman James Hetfield time to undergo rehab because of his alcohol problems.

Kirk, who has expressed interest in a solo album, released his first release Too Much Horror Business with Abrams Image on October 1, 2012, which was essentially an exhibition of all the horror memorabilia he had collected in 30 years. The 228-page book contained everything from costumes from popular horror movies to movie props and toys with horror themes.

In April 2009 Kirk Hammett, Cliff Burton, and other former and current band members of Metallica were inducted into the Rock and Roll Hall of Fame.

The rocker also suffered from drug abuse at some point in his career. He experimented with cocaine and heroin but eventually decided to wean himself off the drug because he didn’t like the depression that came with it. Hammett says that his comic and horror addiction is a better alternative to his drug addiction and helps him stay on track and get away from drugs.

ALSO READ: Everything You Need To Know About Sonya Deville and Her WWE Career

Kirk’s parents, Dennis Hammett and Teofila Hammett have foreign ancestors. His father, Dennis, is part Irish, and his mother, Teofila, is of Filipino descent. He also has a brother named Rick and a sister whose name is unknown.

Kirk Hammet has had several relationships in his time but has twice walked down the aisle. In 1987 he married his first wife, a woman named Rebecca. Three years later, in 1990, they ended the marriage. This happened while Metallica was working on their self-titled fifth album. In 1998 he married his second wife Lani. This proved to be a more compatible union, as they have been together since then. Kirk and Lani have two children. His first son, the Angel, was born in September 2006 and his second son, Vincenzo, was born in June 2008.

Kirk Hammett Height and Other Facts