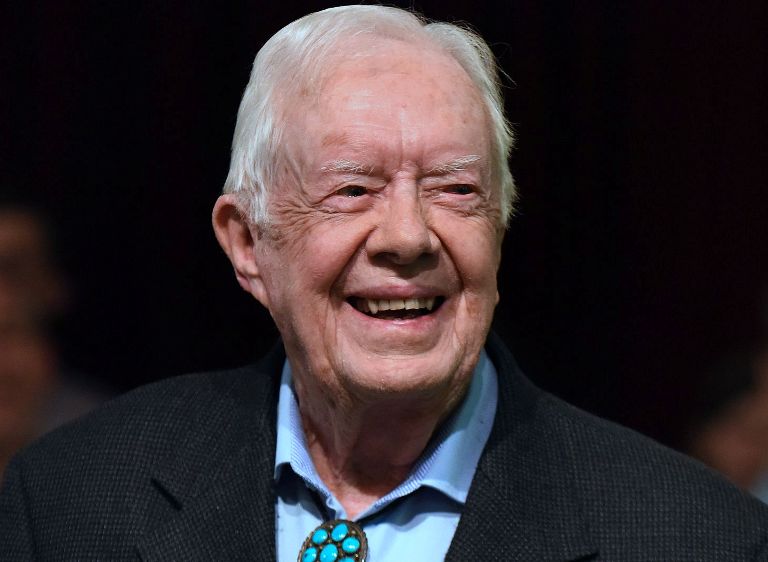 Jimmy Carter is an American politician, best known as the 39th President of the United States, whose term of office lasted from 1977 to 1981. Carter struggled to respond to the pressing challenges facing the United States. He took a giant step in securing peace in the historic Egyptian-Israeli conflict before being replaced by Ronald Reagan in 1981. In addition, Carter also served as Governor of the State of Georgia from 1971 to 1975 and was a Senator in the Senate of the State of Georgia for two terms. In 2002, Jimmy Carter was awarded the Nobel Peace Prize for his efforts to promote peace. Learn more about him below.

He was born on October 1, 1924, as Jimmy Earl Carter Jr. in Plains, Georgia, the son of Bessie Lillian and James Earl Carter Sr. His father was a successful businessman and a Second Lieutenant Reserve in the U.S. Army Quartermaster Corps during World War I, while his mother worked as a registered nurse in the Wise Sanitarium, now known as the Lillian G. Carter Nursing Centre. He is the first of his parents’ four children, he has two sisters Gloria and Ruth Carter, and a brother Billy Carter.

Carter completed his high school education at Plains High School in Plains, Georgia. He played basketball for the school team and graduated in 1941 as one of the best in his class. Because of his brilliance, he was the valedictorian during his graduation. Soon after graduation, he enrolled at Georgia Southwestern College before transferring to the Georgia Institute of Technology in Atlanta, where he earned his bachelor’s degree in engineering. Upon graduation, he was accepted into the U.S. Naval Academy in Annapolis in 1943. Three years later, he graduated as one of the best students in his class.

Beginning in 1948, Jimmy was assigned as a Naval Officer in various locations and after five years of service, he left active duty. Like his father, he served in the inactive Navy Reserve from 1953 to 1961, before retiring with the rank of lieutenant. During his service, he was awarded the National Defensive Service Medal, China Service Medal, American Campaign Medal, and World War II Victory Medal.

Carter’s father died in 1953, and after his death, the family business fell into a state of disorganization. Jimmy was forced to get bank loans to revive the business. He also received lessons in agriculture while his wife learned to account so they could work together to better run the business. While doing so, he also joined in community politics, winning a seat on the Sumter County Education Council in 1955, of which he eventually became chairman.

Jimmy did a great job as a Southern politician; he was among the white citizens who stood up against all forms of racial discrimination in the South. He also declared his interest in running for the Senate seat 15 days before the election. The election results were rigged in favor of his opponent, and when he challenged them in court, a new election was called, which he eventually won.

When he served two terms as Georgia State Senator from 1963 to 1967, Carter and his family became strong supporters of John F. Kennedy. He earned a reputation as a tenacious and independent politician who fought for justice, but after the assassination of President John F. Kennedy, Carter resigned from office. He was later re-elected for a second term in 1964, and on the last day of his term, he announced his candidacy for Congress.

Jimmy Carter triumphed over his opponent Carl Sanders in 1970 and won the Georgian governor’s seat; he served in this position for four years until 1975. He also expressed his interest in running for the presidency, which led to his participation in the U.S. presidential elections in 1976. After winning the Democratic Party primaries, Carter elected Senator Walter F. Mondale as his presidential candidate in the 1976 elections. He defeated incumbent President Gerald Ford and was installed as the 39th President of the United States in 1976.

In his function as POTUS, Carter’s greatest achievement was the securing of peace between Israel and Egypt, which led to a historic peace treaty between the Camp David Accords. Despite Carter’s remarkable achievements, his administration was considered a failure due to his poor relationship with Congress and the media. His failure to save the 66 Americans who were taken hostage at the U.S. Embassy in Iran in 1979 also contributed to his failure to run for re-election. During the 1980 presidential election, Carter lost to Ronald Reagan, and the hostages were released on the day he resigned from office.

Although he was widely regarded as an unsuccessful President of the United States, Carter managed to rebuild his reputation through his humanitarian efforts. Today he is considered one of the greatest ex-presidents in American history. He founded a non-governmental organization called the Carter Center in 1982. The organization helps to promote human rights and fight poverty in over 80 countries around the world. He served as a diplomat during the regime of President Bill Clinton and also offered himself to the Trump administration as a diplomatic envoy for North Korea.

Net Worth: How Much is Jimmy Carter Worth?

Unlike some of the former presidents of the United States, Jimmy Carter came from a relatively wealthy background. He was the only U.S. president in history who lived in a council apartment before taking office. However, Carter is not one of the richest presidents Americans have ever had, but Donald Trump. Carter’s net worth is $8 million.

Carter met his wife Rosalynn Smith during his studies at the Naval Academy, and the duo entered into the marriage in 1946. The amazing couple has been married for over 70 years and has four children, three sons – Donnel, Jack, and James – and one daughter, Amy Carter. They also have two great-grandchildren, eight grandchildren, and three granddaughters. His oldest son, Jack Carter, ran for the Nevada Senate in 2006, while his grandson, Jason Carter, is a former senator from the state of Georgia. In December 2015 he lost his grandson Jeremy Carter to an unreported illness.

His Height and Other Interesting Facts

1. Jimmy Carter is not the greatest ex-president of the USA, but he is certainly not the smallest either; he stands at a height of 5 feet 9.5 inches.

2. He has arranged his funeral at his home in Plains, Georgia

4. Carter has cancer in his family, his parents, and three siblings all died of cancer.

5. He triumphed over Gerald Ford to win the U.S. President and was beaten by Ronald Reagan after his first term in office.