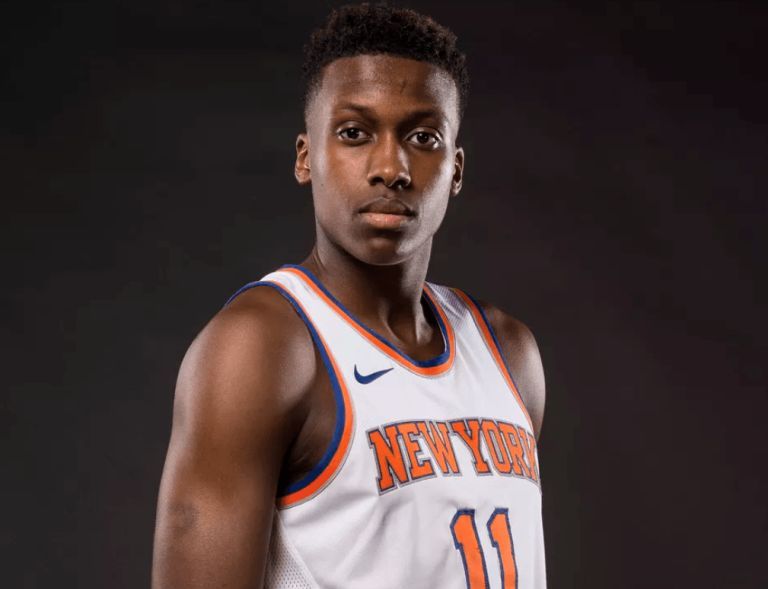 Frank Ntilikina is a French basketball star who plays for the New York Knicks of the National Basketball Association (NBA). He spent the first three years of his professional career in his native France before applying for the 2017 NBA Draft, where he was selected in the first round by the New York Knicks.

Frank Bryan Ntilikina was born on July 28, 1998, in Ixelles, Belgium. At the age of 3, his family moved to Strasbourg, France, where he grew up. He has two older siblings. As an early bloomer, Ntilikina started playing basketball at the age of five with the St-Joseph Strasbourg club. At the age of 15, he joined the youth academy of SIG Basket, a professional basketball club based in Strasbourg, and within a year helped the team win the French Youth League title in the 2014-15 season. The young man received much critical acclaim and international prestige when he appeared in the 2014 edition of the Jordan Brand Classic.

Frank Ntilikina started playing basketball on a professional level for SIG in early 2015. However, in December 2015 he officially signed a professional contract with the club. The Pro-A season 2015-16 was his first full season with the club, and he helped the team to second place in the league. His outstanding performances during the season also earned him the LNB Pro A Best Young Player Award. The talented young player also took part in the “Basketball Without Borders Global Camp” in Toronto, Canada, in February 2016.

In the 2016-17 Pro A season, Ntilikina became an integral part of the SIG basketball team, leading the club to another second place and winning the second consecutive LNB Pro A Best Young Player Award for himself. In April 2017 he signed up for the 2017 NBA Draft, which marked the beginning of his transition to the highest basketball league in the United States.

He participated in the first round of the 2017 NBA Draft when he was voted eighth overall by the New York Knicks. On July 5, 2017, he signed a contract with the Knicks, becoming the second youngest NBA player in the 2017-18 season behind Ike Anigbogu of the Indiana Pacers.

The talented player made his NBA debut on October 19, 2017, in the Knicks’ 84-105 defeat by Oklahoma City Thunder. However, he didn’t score his first points until October 28, when the Knicks defeated the Brooklyn Nets 107-86. Apparently, Ntilikina has a weakness for the Brooklyn Nets because he also scored his first double (10 points, 10 assists, 7 rebounds, 2 blocks, and a steal) in the Knicks’ 119-104 win over the Nets on January 15, 2018.

Other highlights of his rookie season included his participation in the Rising Stars Challenge at the 2018 NBA All-Star Weekend. In the 2017-18 NBA season, he made 9 starts in a total of 72 appearances with an average of 5.9 points, 3.2 assists, and 2.3 rebounds per game.

Ntilikina’s mother, Jacqueline Mukarugema, originally comes from the West African country of Rwanda. However, she fled the country in the early 1990s after a brutal civil war. She finally settled in Brussels, Belgium, where Frank was born. His father was born in Belgium, but little is known about him, as he left the family soon after his birth. At the age of 3, his mother moved with the family to Strasbourg, France, where he grew up.

Frank Ntilikina has 2 older brothers, Brice and Yves, from whom he inherited the passion for basketball. He has held on to this passion since childhood, while his brothers now earn their living in a completely different field, Brice as a surgeon and Yves as a physiotherapist.

Who is Frank Ntilikina’s Girlfriend?

Frank Ntilikina has attracted a lot of attention since he joined the NBA in 2017, but certain aspects of his private life still elude the media. It is currently unknown if the NBA star is currently dating anyone, and if so, the identity of his partner has been well concealed.

Height and Other Body Stats

Frank Ntilikina is 6 feet 5 inches tall and has a body weight of 86 kg (190 lbs). The NBA star plays effectively in both the point guard and shooting guard positions and shows some potential in defense as well. Among several other physical characteristics, he has a large wingspan and the ability to defend multiple positions.