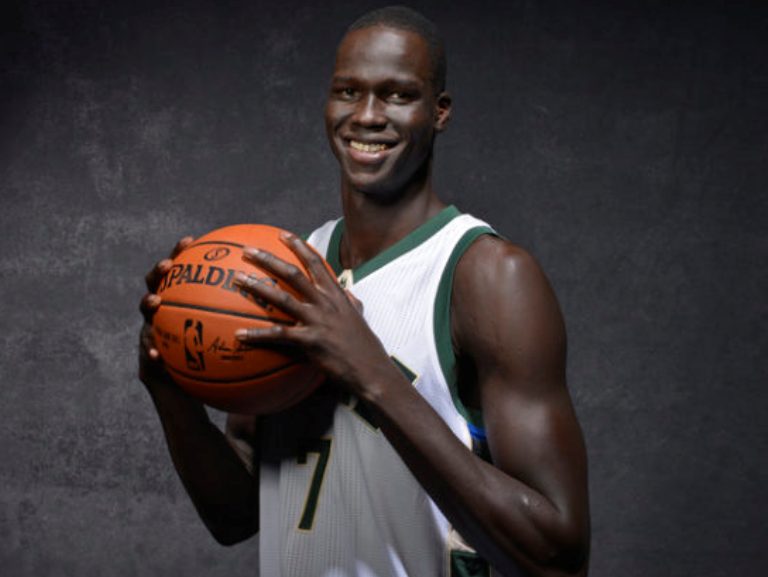 In 2016, Thon Maker joined the growing list of Southern Sudanese players who had made it to the National Basketball Federation after escaping violence in their home country and seeking refuge in another country. The 7-foot-plus-Power Forward/Center voted 10th overall by the Milwaukee Bucks, made it straight from high school into the draft, and was only the second player in more than a decade to do so.

Thon Marial Maker was born on February 25, 1997, in Wau, today’s Southern Sudan. Due to the ongoing civil war in the country at the time of his birth, Maker, his younger brother, and his aunt fled to Uganda, where they were staying when they applied for refugee status in Australia. When Maker was five years old, the Australian government accepted its application and allowed the family to move to Perth in Western Australia.

At the age of 14, Maker was discovered playing football by sports agent Edward Smith, an Australian of African-American descent who has helped a number of Sudanese immigrant children with their basketball careers. Smith was able to convince Maker’s aunt to let the young outstanding boy move with him to Sydney, where he would have the opportunity to learn the game properly and at the same time receive a good education in Australia’s most populous city. His aunt agreed, and Maker played for the St. George Basketball Association before going to the United States for a talent camp.

After entering the United States, Thon Maker enrolled at Metairie Park Country Day School in Louisiana. He moved to another school in the state before finally settling at the Carlisle School in Martinsville, Virginia. In his first two high school basketball years at Carlisle School, Maker played 53 games, averaging 22.2 points, 13.1 rebounds, 1.9 assists, 1.4 steals, and 4.5 blocks per game. In his sophomore year, he led the school to a state championship that earned him the Gatorade Virginia Boys Basketball Player of the Year award.

In his third year, Maker joined his younger brother in the United States, and again he transferred to Orangeville District Secondary School in Ontario, Canada. He decided to move here because Smith had found work as an assistant coach at the Athletic Institute in Mono, Ontario.

In 2015, Maker was recruited by a number of college programs in the United States, but decided to sign up for the 2016 NBA Draft. The move required NBA approval, which he obtained by proving that he had graduated a year earlier to meet the admission requirements for high school graduates, to have an additional year after graduation before turning pro.

After impressing in the NBA Draft Combine, Thon Maker was awarded 10th place by the Milwaukee Bucks and then joined the team for the 2016 NBA Summer League, where he averaged 14.2 points and 9.6 rebounds in the tournament, earning the honor of the second team in the NBA Summer League. He then made his NBA debut on October 30, 2016, in a game against the Detroit Pistons.

When they entered the 2016 NBA Draft, many teams decided not to select Thon Maker because they believed his age was misinterpreted. It was assumed that the then 19-year-old was at least 23 years old.

Despite Canada’s interest and conviction that Maker should represent the country on a national level, the baller chose Australia. He made his debut for the Australian national team on June 29, 2018, in a FIBA World Championship qualifier.