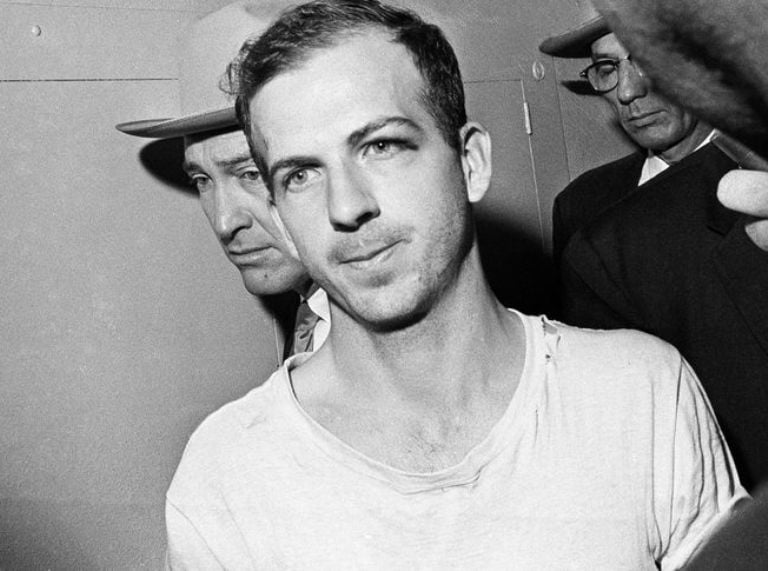 There are many ways to become famous. You could become a movie star, an accomplished musician, invent something or shoot the president of the United States. Lee Harvey Oswald chose the latter. America is a country with a rich history, and there are many famous men in its history book, but very few of them are there because they assassinated the president. Lee Harvey, however, made it onto the very short list by shooting a U.S. president with a sniper rifle from the sixth floor of a camp.

His story and his last great act in life are a story that has spurred various conspiracy theories and, according to recent studies, will continue for a long time to come because people simply do not believe the official story of the Warren Commission, a commission set up to investigate the murder of John F. Kennedy.

Who is Lee Harvey Oswald? Bio

If someone said that Lee Oswald would one day assassinate the President of America, it was most likely a joke based on the personality of Lee Harvey from his childhood. Growing up in New Orleans, Louisiana, Oswald was considered a hermit with anger problems as a child. A particularly interesting case was 1952 when his mother moved him to New York City. Oswald is said to have threatened his mother with a knife after he had beaten her during an argument; he was 12 years old at the time.

Oswald’s parents were Robert Lee Oswald and Marguerite Frances Claverie. There are people who believe that Oswald’s anger and behavioral problems were side effects of growing up without his father, who died two months after he was born. If so, it was permanent damage, since he was diagnosed with a “personality pattern disorder with schizoid features and passive-aggressive tendencies.

Despite his behavioral problems, Oswald was never a stupid child. Although he had difficulties with spelling, he was a lively book reader. He identified himself as a Marxist after he had burned through several socialist literary works.

He never finished high school, but when he joined the Marines at the age of 17, he had attended 12 schools and lived in 22 different places. Some historians and psychologists believe that the instability in his life may also have contributed to what kind of person he was.

One would have expected that a man with his psychological profile would not be allowed to join a military unit, but it was a time of war and high tensions between countries around the world, with America at the helm, and so Oswald was drafted into the Marine Corps on October 24, 1956, at the age of 17.

His time with the Marines began in an impressive manner, graduating at the top percentile of his class and receiving security clearance for high-level military operations. In his early years as a Marine, he was even considered a top marksman. His time without problems did not last long, however, and after a series of misdemeanors, including a shot in the elbow, he was court-martialed. Oswald never forgot the socialist teachings of his early days of reading, and after earning enough in the Navy, he applied for a release from hardship in order to later defect to the Soviet Union.

With some effort, which included cutting off his own wrists to convince his tour guide that he was serious, Oswald was finally made a citizen of the Soviet Union. He lived in Minsk and met his wife, Marina Prusakova, in March 1961. Shortly afterward he returned to the United States with his wife and two children.

ALSO READ: Joan Jett Wiki, Net Worth, Is She Lesbian or Gay? Here’s Everything To Know

Before killing John F. Kennedy, Oswald had made an attempt on the life of Edwin Walker, a retired anti-Communist U.S. major general. Only a few months after his assassination of Edwin Walker, Oswald was preparing for his swan song. On November 22, 1963, he shot and killed John F. Kennedy. It was the climax of everything that had happened in Lee Harvey Oswald’s life.

Even psychopaths go through the movements of human life. Lee Harvey Oswald married Marina Nikolayevna Prusakova in 1961, when she was 19 years old, after six short weeks of encounter. She was a pharmacist and moved back to the United States with Lee Harvey. She had two daughters – June Lee Oswald and Audrey Marina Rachael Oswald – with Lee Harvey.

Who Killed Lee Harvey Oswald and Why?

After John Kennedy was murdered, Oswald and Lee were confirmed as prime suspects. He was shot while being led to a car that was to take him to the county jail. He was shot in the abdomen by Jack Ruby, a local nightclub owner. Jack’s motive for shooting Lee instead of letting him go to trial is one of the countless conspiracy theories about the events of November 1963, but the man, Jack himself, insisted that he simply wanted to spare Kennedy’s widow the trouble of going through a trial.