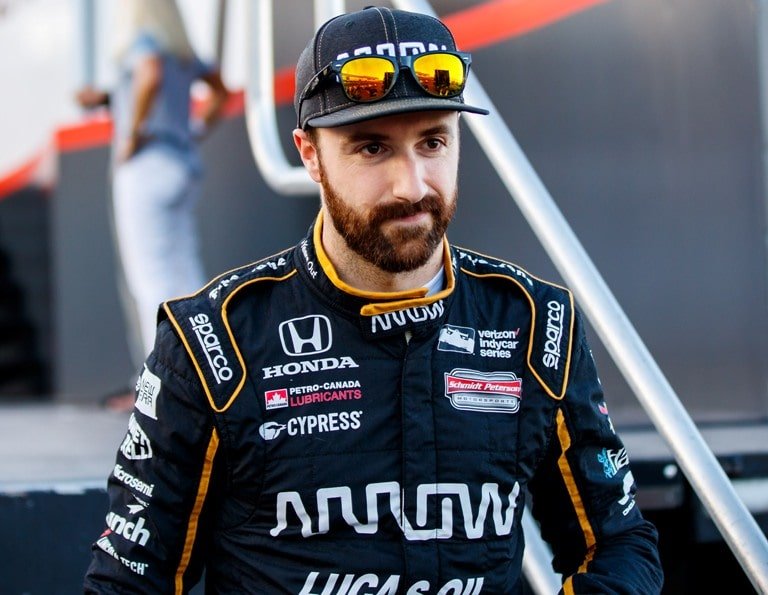 James Hinchcliffe started racing in 2003 when he entered the Bridgestone Racing Academy F2000 Series. He is a remarkable car racer known for his exceptional skills and uniqueness. Canadian-born James Hinchcliffe is also known for his self-proclaimed status as mayor of a fictional town – Hinchtown. James, who is called the mayor of Hinchtown – his alter ego – also uses the name Hinchtown for commercial purposes. Here you can learn more about the racing ace.

He was born on December 5, 1986, in the town of Oakville, Ontario, Canada, to his father Jeremy Hinchcliffe, and his mother Arlene Hinchcliffe. He grew up with his parents and siblings Christopher Hinchcliffe and Rebecca Hinchcliffe. As an adolescent, young James was inclined towards sports, especially car racing. When he got his first go-kart at the age of 9, he drove sports cars and participated in mini-competitions at home as a child.

This did not stop his parents from giving him the education he needed. James attended Oakville Trafalgar High School. He also attended McMaster University, where he received a degree. James Hinchcliffe started his career in karting and in 2003 also in car racing. His skill earned him his first rookie place in Formula BMW USA after winning three of his races in 2004.

In 2005 he won 3 victories in the Star Mazda Series before moving on to the Champ Car Atlantic Series the following year. Also in 2006, he finished 10th overall in a race in Portland. That was at the time when he was also trying out the profession of commentator for the Eurosport coverage of the Champ Car events; he was pretty good.

ALSO READ: Jessica Clements Biography and 5 Fast Facts You Need To Know About Her

It was time to get down to business, and James Hinchcliffe teamed up with A1 Team Canada in the Canadian Grand Prix. In his first race with the label, he drove at Zandvoort, where he finished 8th in the sprint and 13th in the feature. He had led the feature by a majority after finishing second in the ghost race but collided with Alex Young, who later became the winner. He finished 4th and 10th in the sprint and feature race in Beijing. This was followed by his return to Forsythe Racing for the 2008 Atlantic Championship season, where he finished fourth, winning the second race of the season at the Mazda Raceway Laguna Seca.

After signing with Sam Schmidt Motorsports and Team Moore Racing in 2009 to compete in various tournaments, James Hinchcliffe spent 2010 as a driver analyst for Indianapolis Motor Speedway Radio Network. He had replaced Davey Hamilton, the driver analyst who competed in the 500 races of Indianapolis 2010.

In 2011 he made the leap into the Indie Cars Series after signing with Newman/Haas Racing and making his debut at Barber Motorsports Park. Hinchcliffe finished fourth at the Streets of Long Beach, his second race in the series. With a “lucky charm”, a pair of gloves belonging to his idol George Moore, he took part in the Indianapolis 500 in 2012. It was indeed his lucky charm, as he qualified for second place overall and also finished sixth on race day.

He has indeed played an extraordinary role in the world of motor racing.

Talks about James’ personal life have given rise to much speculation and rumor due to its vague appearance. First, there were rumors that the race car driver was married, and then another one followed claiming the opposite.

The mayor of Hinchville did not help at the time by making his position on marriage clear. In 2016 it was reported that the car racer was married to a fellow racer, Kathleen Thompson. It turned out to be untrue, however, as the “minister” only performed the wedding of IndyCar driver colleague Charlie Kimball and his bride Kathleen Thompson.

Now that we’ve got that out of the way, it wouldn’t be wrong to say that James has no wife of his own. Instead, James Hinchcliffe is said to be in a romantic relationship with Rebecca Darlton, a Canadian actress. The lovebirds got everyone talking about their public admiration for each other on social media. According to reports, they have bought a house together, but this has not been confirmed. As expected, the public display of affection in and outside social media sparked much marriage speculation.

But the couple seems to be more involved in their various businesses.