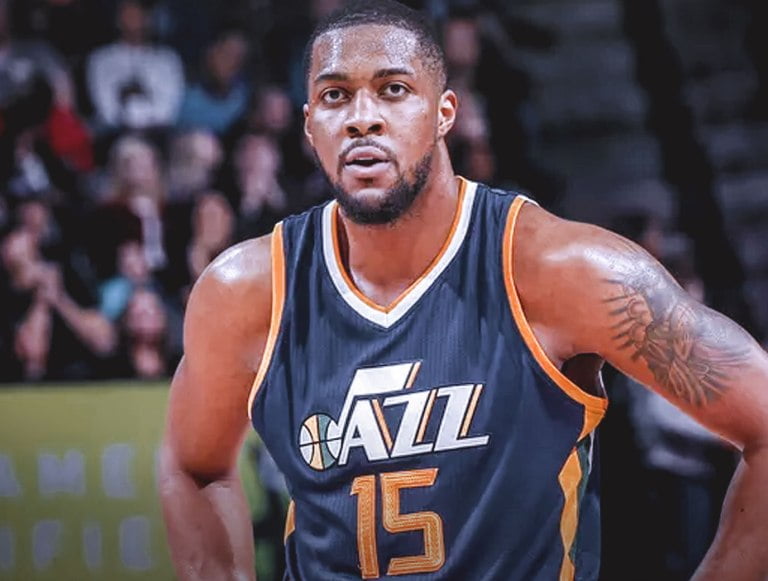 After winning the 2009 Mr. Georgia Basketball and Mr. Basketball USA awards for the best high school basketball players in the state of Georgia and the country in general, Derrick Favors had the NBA world at his feet. However, the Power Forward/Centre, who was selected with the third overall selection in the 2010 NBA Draft, did not quite manage to relive the highlights of his youth, even though there are very few people who can stop him on his day.

Favors was born on July 15, 1991, in Atlanta, Georgia, as Derrick Bernard Favors. He was one of three children of his single mother Deandra Favors, who, although she had several jobs to support her family, was able to steer her son in the right direction instead of dragging him into gang life in the crime-ridden Southside of Atlanta.

Growing up, Favors, despite his obvious athleticism, was very involved in his schoolwork rather than sports. He was like that because he doubted his talents and therefore did not want to waste his education. His AAU coach saw it differently, as he is said to have been the one who always dragged Favors onto the court to practice his game. What later turned out to be his motivation was when he stumbled upon Kobe Bryant’s children’s book, which describes his rise to fame. The story of the Los Angeles Laker’s legend motivated him and he never looked back.

At South Atlanta High School, Derrick Favors was considered the best of all high school basketball players in the country. In his senior year he averaged 28.1 points, 13.3 rebounds, 5.0 blocks, 3.0 steals and 2.0 assists per game as he led his school to the Georgia Class AAA State Championship. After graduating, Favors chose to stay close to home by attending Georgia Tech instead of attending other prestigious college basketball programs such as NC State or Memphis, which all offered scholarships.

ALSO READ: Jason Genao Age, Height, Bio, Other Facts About The On My Block Actor

In his first year at college, Favors averaged 12.4 points and 8.4 rebounds per game to help his team reach the final of the ACC tournament, where they lost to Duke University. Favors was subsequently appointed to the ACC All-Freshman Team, as he was also named ACC Rookie of the Year. He then announced that he would give up his three remaining college years to compete in the 2010 NBA Draft, where he was voted third overall by the New Jersey Nets.

Derrick Favors spent less than a year in New Jersey before switching to Utah Jazz in February 2011, although he still managed to earn the honor in the NBA All-Rookie Second Team. Since then, Favors has been a significant part of the jazz buildup.

It is not clear whether Derrick Favors has gone so far as to sign legal documents that would lead to his long-time partner Shivolli DaSilva being referred to as his wife. Nevertheless, the two, who have been a couple for a long time, have together welcomed a number of twin girls, Sanaa and Serenitee Favors, in 2015.

Mrs. DaSilva, who like her husband is from Atlanta, Georgia, was born November 23, 1990. After completing her education, she found work as a front desk manager at Gold’s gym in Atlanta, where she also began a career as a model. After meeting her husband and moving with him to Utah, DaSilva became an entrepreneur by first registering her own production company called Volli Production, LLC. She and Favors then opened Minky Couture’s luxury blanket, S&S Lux.

Despite the bad blood between Favors and his biological father, who is said to have fathered numerous other children around the country, he apparently got the sports gene from the man who himself was a former Division I basketball player.

Derrick Favors never knew or met his father, Johnnie Parker, when he was growing up. The mother of Paker and Favor, Deandra, had an affair when the two of them were employed by Eastern Airlines in Atlanta in the late 1980s and early 1990s. The affair later came to an end after Parker found out that Deandra was pregnant with Derrick. This prompted him to sever all ties with her so that his wife would not find out about his extramarital relationship.