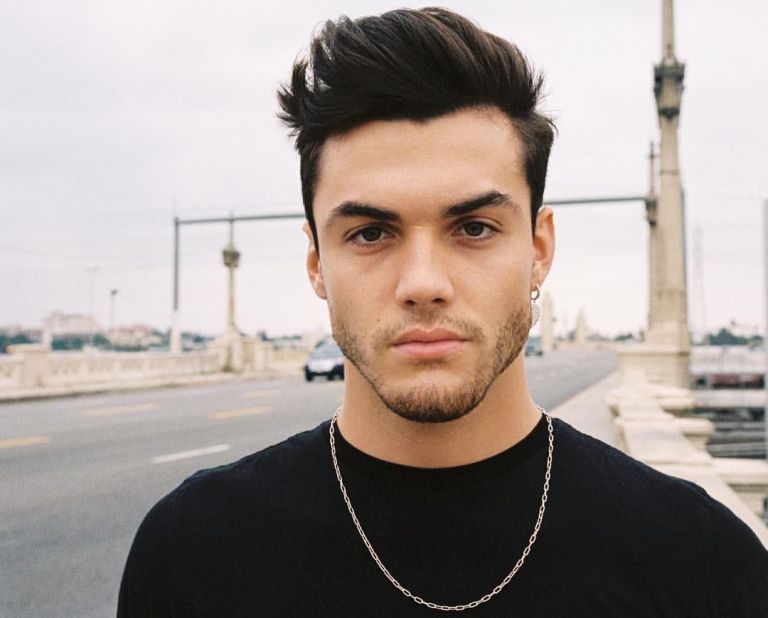 If you’ve ever heard of the Dolan twins, you know for sure that Grayson Dolan is one half of the duo. Together with his brother Ethan, Grayson rose to fame and glory in 2013 thanks to their Vine account, in which they exchanged funny video clips and immediately attracted a huge fan base.

Before Vine was closed in 2017, the twins had over 6.4 million followers. On their YouTube channel, they gained over 10.6 million followers. Among other achievements, the Dolan brothers have won three Teen Choice Awards for Choice Web Star: Male, Choice YouTuber, and Choice Comedian.

It’s difficult to talk about one of the brothers without including the other, but we’ll try to put more emphasis on Grayson, who is about 20 minutes younger than Ethan.

How Old is Grayson Dolan?

As mentioned above, Grayson Bailey Dolan was born on December 16, 1999, in Long Valley, New Jersey, as a twin. He was born to Lisa, a hairstylist, and Sean Dolan, a school principal. He has an older sister named Cameron (born in 1997), who introduced him and his twin to Vine after she herself had achieved a certain level of popularity with the video-sharing platform.

Before their fame with Vine, the Dolan twins had hopes of a sporting career. They played in both their high school football team and the wrestling team. Grayson even won a tournament held at Madison Square Garden in New York.

Grayson Dolan released his first vine video in May 2013. The clip was about a child stealing mayonnaise. His video was made after his brother Ethan posted a clip of himself in a garbage bag with a vacuum cleaner that sucked all the air out of the bag.

The Dolan twins gained more attention when they were signed to Brian Robbins’ AwesomenessTV in 2015. By October 2015 they had made enough money to start a life of their own, so they moved to Los Angeles, where they live in a large two-bedroom house.

Who Is His Girlfriend?

After making it so early in life, it’s not unreasonable to assume that Grayson Dolan has become the dream of many girls out there. But when it comes to his love life, the comedy duo’s younger brother gives little or nothing away to the media. This makes it incredibly difficult to tell one or two things about his love life.

It used to be believed that he was with Chloe Alison, another social media star. Like Grayson, Chloe Alison also started posting Chloe in Vine under the nickname Cash Money. She is a good singer who regularly posts clips of herself on her SoundCloud account, in which she covers hit songs. Before Vine was closed, she gained about 200,000 followers and is very popular on Instagram. It remains a mystery to the media why they split up if they ever really went out together.

Apart from Chloe Alison, there is reason to believe that Grayson Dolan may have also dated Sofia Olivera. Like him and his alleged ex-Chloe, Sofia is a social media personality who gained fame through Vine. It is said that the two became friends and eventually went out with each other after shooting a video together for the platform. Allegedly he called her his girlfriend on various platforms like Twitter and AskFM.

Although it’s been quite a long time since the conclusion was reached that Grayson and Sofia are no longer lovers, hardly anyone can say whether he has moved on to other people. Nevertheless, other popular names that have been used to speculate that he is romantically linked to the singers Olivia O’Brien and Madison Beer are among those that have been used.

Details of His Brother Ethan’s Relationships

Just like his brother Grayson Dolan, many people were not surprisingly curious about Ethan’s love life. Since the twins became famous, the older Dolan has been associated with a few ladies, but none of the alleged relationships have been substantiated.

As early as 2015, it was reported that Ethan was dating Meredith Mickelson, a popular model who was also successful as an influence on Instagram. Although Ethan and Meredith never explicitly stated that they were a couple, there were many indications that they were; from their social media posts to their mutual friend Steven Kelly, who concluded that the two had been together for months.

There is also Emma Chamberlain, a famous American YouTuber with over 8.53 million subscribers on her channel. Recently, it has been revealed that she is dating Ethan. Again, neither of them has confirmed this, but there are things that this is true. For example, Grayson once referred to Emma as Ethan’s girlfriend.