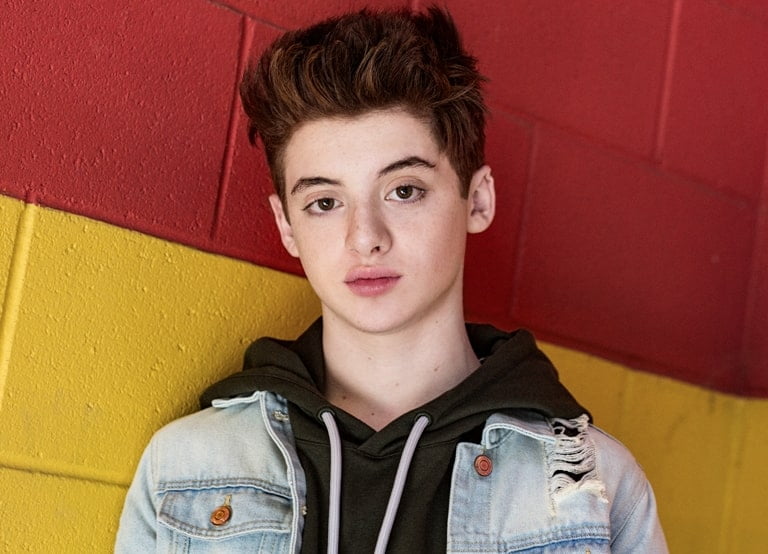 Thomas Barbusca is an American actor best known for his role as Chip Pemberton in the FOX comedy hit series The Mick. The fresh redhead first caught the attention of Hollywood in 2015 when the funny camper Drew in Netflix’s comedy series Wet Hot American Summer caught the attention: the First Day of Camp.

As a young boy, Thomas accompanied his sister, an actress, on a trip to Los Angeles, where she had landed a role in a television series. Although the young Thomas had only gone along on this trip, he soon became the center of attention. After he had acted in numerous TV commercials, he began to appear in a number of TV shows. After proving himself, he landed recurring roles in many television series, including Grey’s Anatomy, American Horror Story, and One Day At A Time. Thomas Barbusca is definitely a new star on the Hollywood horizon and one to watch out for.

Thomas Barbusca was born on 3 March 2003 in New Jersey. He grew up at the side of his older sister, Brielle Barbusca, who is also an actress. The talented actor was always taught at home. He also does not take acting classes, although he has a private acting coach.

His television appearances dating back to the age of six. When he saw his older sister working on film sets, Thomas’s interest in acting was awakened. His sister Brielle Barbusca got a regular role in the comedy series The Starter Wife and had to move to Los Angeles. The young Thomas, who was already eager to become an actor, followed. When they came to LA it turned out that Thomas was very popular with advertising agencies.

He was booked for commercials for big brands like Dominos, Ford, Kraft, JC Penney, and Lunchables. Thomas, who had only accompanied his sister on the trip, proved to be very popular. From television commercials, he got roles in a number of television shows. As a result, the young Thomas Barbusca got recurring roles in the NBC sitcom The New Normal and in the successful medical drama series Grey’s Anatomy.

Thomas Barbusca made a major breakthrough when he was cast in the 2015 sequel to Wet Hot American Summer. The young actor drew Hollywood’s attention to his character Camper Drew with his clever remarks. He was subsequently cast in a number of other recurring roles. Because of his fresh appearance, Thomas was also cast as the obnoxious Peter Pan in the 2015-16 Geico advertising campaign and in the Old Navy’s “Back to School” campaign with Amy Schumer. In 2016 Thomas Barbusca starred in the comedy film Middle School: The Worst Years of My Life.

The Mick premiered on January 1, 2017, and with his impeccable performance of his Chip Pemberton character in the series, Thomas Barbusca proved that he is one of the talents to watch out for in Hollywood’s future. The young actor had booked another show the same day he got the role in The Mick, so much in demand is this actor from New Jersey. However, he chose Mick and has since made the most of this opportunity.

He also played the lead role in the indie film Search, which premiered at the 2018 Sundance Film Festival in 2018. Thomas Barbusca is just 15 years old and already on his way to becoming a Hollywood star. He certainly has plenty of time to accomplish many more heroic deeds in Hollywood.

Thomas Barbusca is of Italian descent. His great-grandparents were Italian immigrants. His mother’s name is Debra Lynn Barbusca and his father Louie Barbusca. His parents live in New Jersey. Thomas has not made public appearances with his parents, as he usually takes his sister Brielle to the red carpet.

In his rising acting career, Thomas Barbusca had a whole string of film roles. In 2012 Thomas was cast in the leading role of Cody in the short comedy Microeconomics. In 2014 he played the role of Duncan in another comedy The Last Time You Had Fun.

The talented actor also sang the role of Jason in the 2015 animation Summer Memories, and in 2016 he played the role of Lion in another comedy Middle School: The Worst Years of My Life. He also had a short appearance in the 2018 film Search.

So far Thomas Barbusca has appeared in numerous television shows, including the following:

His most notable television role to date is the role in the FOX sitcom The Mick. In the series, Thomas portrays the character Chip Pemberton, one of three children whose parents have been accused of fraud. The Fox series was created especially for Thomas Barbusca, taken literally. The co-authors of the sitcom, Dave Chernin and John Chernin, had each seen Thomas in 2 different roles.

John had seen him in Wet Hot American Summer, while Dave first saw Thomas in his Geico commercial. The brothers were so impressed with Thomas’s performances in both roles that they decided to create a show for him without knowing that they both had the same boy in mind. The writers only realized this fact when Thomas entered the audition room.