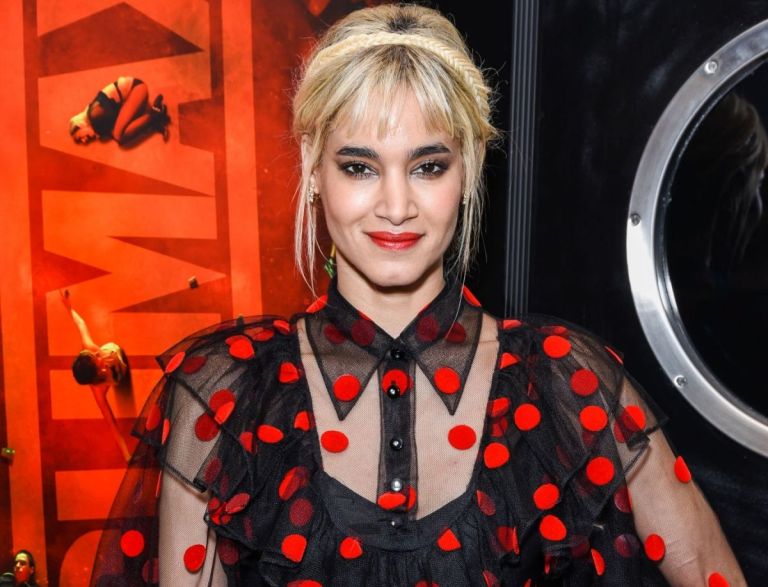 She made her big break as a professional dancer, booked a Nike campaign, and later became a background dancer for Pop Queen Madonna (she was at her Super Bowl halftime performance in 2012) and even appeared in the music video for Michael Jackson’s “Hollywood Tonight”. But 2012 was the last time Sofia Boutella danced professionally.

In fact, she stopped touring with Madonna to be able to concentrate on acting. Three years later she got her acting break with the role of Gazelle in Kingsman: The Secret Service (2015). Some of her other films worth mentioning include Star Trek Beyond (2016), The Mummy with Tom Cruise, and Atomic Blonde alongside Charlize Theron.

Boutella was born on 3 April 1982 in Bab El Oued, Algiers, Algeria. From the age of 5 years, she began to take an interest in dancing. However, her childhood was interrupted by the Algerian civil war, which forced her parents to emigrate with the whole family to Paris, France, where she spent the rest of her childhood. Her ethnic origin is Algerian, but she has both Algerian and French citizenship.

Sofia received her entertainment DNA from her father, Safy Boutella, who was a jazz musician. Her mother, however, was an architect.

In France, Sofia continued to dance and was a member of the Vagabond Crew, who were the winners of the Battle of the Year, an international breakdance competition, in 2006.

In 2007, at the age of 25, Sofia heard from a friend that Nike was holding auditions in Paris. She auditioned and was selected to earn a major breakthrough in her dance career.

Fortunately for Sofia, the choreographer for the Nike campaigns, Jamie King happened to have pop star Madonna among his clients. As a result, Sofia’s career took a huge boost when she soon moved to America and became one of Madonna’s background dancers.

Despite her break, Sofia did not neglect her training. She attended and graduated from the Berklee College of Music in Boston, Massachusetts.

Sofia also began working with other celebrities such as Rihanna, Chris Brown, Ne-Yo, Usher, and others. Before she gave up professional dancing in 2012 to focus exclusively on acting, Sofia had already performed as an actress. She played Eva in StreetDance 2.

The Mummy in which she played Princess Ahmanet happens to be her biggest hit. The film brought in over 400 million dollars, with an average budget of 160 million dollars.

There is certainly no lack of Boutella when it comes to the romance department. In 2008 she is said to have had a relationship with M. Pokora, but not many details were known from this partnership, not even how long it lasted.

At the time of this writing, however, we can confirm that she is in a relationship with her actor colleague Robert Sheehan, who is best known for his roles in the television shows Misfits and Love/Hate.

According to Sheehan’s interview with Independent, he had met Boutella in India around 2013/2014, while they were both shooting Jet Trash, which was to be released in 2016.

After their return to London, the two had already started a relationship and have remained together ever since. However, their relationship was called into question sometime in 2016 when rumors arose that Sofia might be in a relationship with her Star Trek Beyond co-star Chris Pine. The rumors arose when they were seen holding hands in Coachella in April 2017.

The “holding hands” turned out to be friendly, as it turned out that Sofia is still together with Sheehan. In his 2018 interview with Independent, Sheehan, who lives in Ireland, described the difficulties they face as couples who both have a busy schedule.

“They sometimes stare at each other five months apart,” the actor said. “But it always works out. She gets off and jumps on a plane, and I get off and jump on a plane. The longest time we were ever apart was only six weeks,” he added.

Robert Michael Sheehan was born on 7 January 1988 in Portlaoise, Co.Laois, Ireland. He started professional acting in 2003. His role in Love/Hate earned him an IFTA award for best actor in a supporting role.

Feet: Sofia has beautiful feet, as can be seen on the website Wiki Feet, where she receives 5 out of 5 points. Her shoe size is s 6.5 (US).