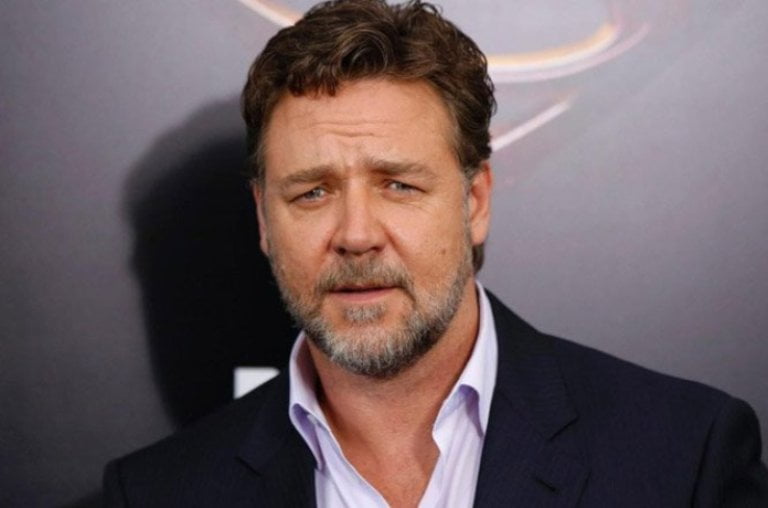 Oscar-winning actor Russell Crowe is known for the blockbuster epic Gladiator, released in 2000, and has starred in numerous films that have become box office hits in recent years, earning him a star on Hollywood’s Walk of Fame.

The talented actor was born on April 7, 1964, in Wellington, Strathmore Park, New Zealand, as the son of his parents Jocelyn Yvonne and John Alexander Crowe. He is said to have moved to Australia with his parents at the age of 4, and as they worked as caterers on film sets, Crowe spent most of his early childhood on film sets with his parents. At the age of 6, he got his first acting role in the sitcom Spyforce and appeared in the series The Young Doctors. In 1978 he returned to New Zealand with his family and enrolled at Mount Roskill Grammar School, but left at the age of 16 to continue his acting career.

In the 1980s Crowe concentrated on building his musical career in New Zealand, where he performed under the stage name “Russ Le Roq”. It is known that he released singles such as “I Just Want To Be Like Marlon Brando”, “Pier 13” and “Shattered Glass”. Later he returned to Australia with the intention to enroll at the National Institute of Dramatic Art but he was advised not to apply for a role in movies as he already had acting skills. He received his first professional role in 1986 in the New Zealand version of The Rocky Horror Show directed by Daniel Abineri. He was also cast in the film Blood Brothers in 1988, and the following year he played the role of Johnny in the musical stage play Bad Boy Johnny and the Prophets of Doom.

Other notable Australian productions by the actor include The Crossing, released in 1990, Blood Oath 1990, also known as Prisoners of the Sun, Police Rescue 1992, Romper Stomper, in which he starred alongside Jacqueline McKenzie and won the Best Actor Award from the Australian Film Institute (AFI). He also acted in the film Proof, for which he received the award for the best supporting actor.

As his fame grew, Crowe was noticed by American filmmakers and in 1995 he appeared in his first American film, The Quick and the Dead, alongside Sharon Stone, Gene Hackman, and Leonardo DiCaprio. In the same year, he was cast as SID 6.7 in the film Virtuosity alongside Denzel Washington and starred in the romantic film Rough Magic, in which Bridget Fonda also starred. In 1997 he starred with Salma Hayek in the film Breaking Up and appeared in L.A. Confidential, where he was cast as Bud White, a ruthless cop alongside Kevin Spacey and Kim Basinger.

The New Zealand actor had his breakthrough in the Hollywood industry in 2000 with the film Gladiator, in which he played the role of a Roman general who was captured as a slave, starring
Joaquin Phoenix and under the leadership of Ridley Scott. The film was a great success, receiving 12 Oscar nominations and bringing Crowe an Oscar award.

In 2015, the actor directed and starred in his first film, The Diviner. Among the other films in which he has appeared are Master and Commander: The Far Side of the World, Cinderella Man, American Gangster, State of Play, Robin Hood, Les Misérables, Man of Steel, and Noah, to name but a few.

The actor is said to have had a romance with the Australian musician Danielle Spencer since 1989 and finally on April 7, 2003, which happened to be Crowe’s birthday. The couple has two sons named Charles Spencer Crowe and Tennyson Spencer Crowe. However, in October 2012, the couple separated and after 5 years they finalized their divorce settlement in 2017.

The divorce settlement was definitely not cheap, as Danielle allegedly got the ownership of her Rose Bay mansion in Sydney, which is said to have cost about $11 million in cash in addition to the $20 million.

The latest news about her divorce is the Crowe auction sale, which is scheduled to take place on her wedding day, April 7, 2018. The actor plans to sell more than 200 valuable items that he owns in “The Art of Divorce”, as he calls it.

How Much Is His Net Worth

The movie star has not done badly financially at all, and he has accumulated a net worth of 95 million dollars.

The movie star, who has a height of 1.82 m, which is about 5 ft 11 inches, has attracted a lot of attention when it comes to his weight. He is known as an actor who can gain weight to get into the role. For the movie The Nice Guys, he is said to weigh about 121.6 kg to fit into his role alongside Ryan Gosling. The actor also confirms that he works religiously to keep his weight under control so that it doesn’t get the heaviest. His ideal weight for 92 kg should be around 203 pounds.