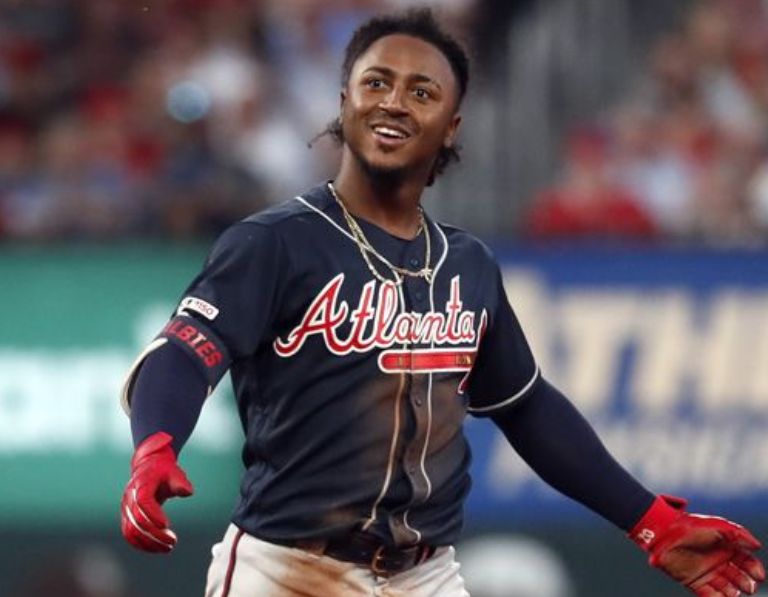 Ozzie Albies is a professional baseball player for the Major League Baseball (MLB) team Atlanta Braves. Born on the Caribbean island of Curaçao, the youngster joined the Atlanta-based MLB team in 2013 as a free player, following in the footsteps of compatriots Andruw Jones and Andrelton Simmons, who had played for the Braves in the past. In just four years, Albies aggressively fought his way through the Braves youth teams and made his MLB debut with the Atlanta Braves on August 1, 2017, and on August 2, 2017, the youngster hit his first home run, becoming the first player born in 1997 to hit a home run in the Major League.

Ozhaino “Ozzie” Jurdy Jiandro Albies was born on January 7, 1997, as the son of Jhadari and Osgarry Albies in Willemstad, the capital of Curaçao, an island in the Dutch Caribbean. He started playing baseball at the tender age of 6 years. While playing in his hometown, young Albies caught the attention of scouts from different parts of the world and finally landed a contract with the Atlanta Braves in 2013. However, he lost his father, Osgarry Albies, before his trip to the United States.

In his debut season, Ozzie Albies played for the Gulf Coast Braves, the Braves’ sister team in Minor League Baseball. In July 2014, he moved up to the Appalachian League with the Danville Braves. Albies ended the season as one of the most promising prospects in baseball. He was voted one of the top 5 prospects in the Braves’ youth system.

In 2015 he joined the Rome Braves, another Braves team in the Minor League. In July 2015, Albies was nominated for the All-Star Futures Game on the United States team and was the only Braves candidate to make the list this year. He was just 18 years old at the time, making him the youngest player to take part in the game this year. The game ended 10-1 in favour of the USA. However, the rest of his 2015 season was affected by an injury to his right thumb in the first week of August.

ALSO READ: Brandon Pirri (Ice Hockey) Biography and Facts You Need To Know About Him

In early 2016, Albies joined the Mississippi Braves, another sister team to the Braves in Minor League Baseball. He beat .369/.442/.512 in only 22 appearances, earning him a promotion to the Gwinnett Braves, the Braves’ triple-A national team. After a two-month stint with Gwinnett, he returned to the Mississippi Braves at the end of June 2016, where he finished the season. Ozzie Albies returned to Gwinnett at the start of the 2017 season.

The talented player finally made it to the top flight in August 2017. He made his MLB debut on 1 August 2017 as the Braves’ second baseman against the Los Angeles Dodgers. At 20 years and 206 days, Ozzie Albies was the youngest MLB player at the time. On August 3, 2017, he scored his first home run in his career.

Although he was appointed to the MLB at a fairly young age, Ozzie Albies had an impressive debut season. In his 244 record appearances, he scored .286/.354/.456 with six home runs, surpassing the league average of 100 with 112 WRC+.

Because of his amazing talent, Albies was signed by the Atlanta Braves in July 2013. For a fee of $350,000, he switched to the MLB as a freelance amateur agent, which for a player of his calibre is considered an absolute bargain hunter. Originally the wonder boy attracted the attention of several MLB teams, but he decided to settle with the Braves because of the team’s association with his compatriots and former MLB professionals Andruw Jones and Andrelton Simmons. In the Braves, Ozzie Albies has maintained a critical balance of confidence and humility that has made him a favourite among coaches and officials.

Height And Other Facts

Ozzie Albies stands at a height of 173 cm (5 feet 7 inches). He has an average weight of 165 lbs (75 kg). In 2017 there were only 10 Major League Baseball players at 5′ 10′ or 170 lbs (170 lbs) weight. Albie’s physique may be unconventional for a typical MLB player, but what he lacks in physical stature, he makes up for with his technical skills. He is characterized by his speed and power, and as a dynamic player, there is definitely room for improvement.