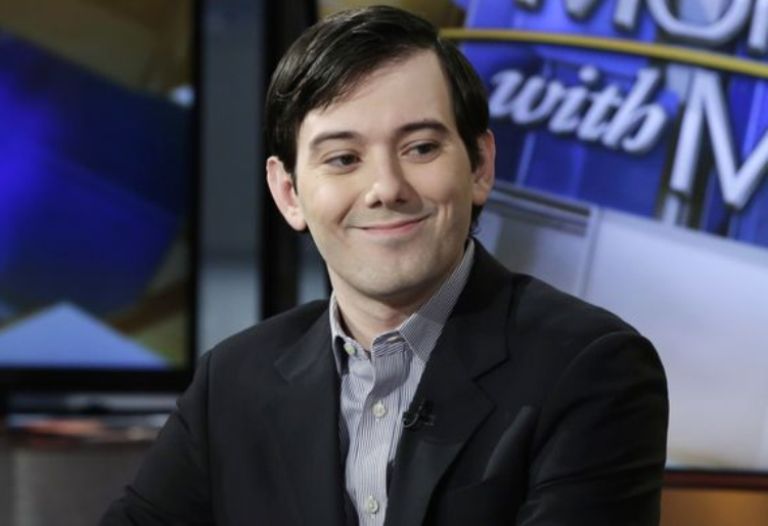 Described by Bernie Sanders (the American politician) as the “figurehead of greed”, named “America’s most hated man” by The Daily Beast in 2015, and notorious as a “pharmaceutical brother”, Martin Shkreli is one of America’s most controversial businessmen.

Although currently incarcerated for securities fraud crimes at the Metropolitan Detention Center in Brooklyn, Martin Shkreli has had great success as an entrepreneur and has served as CEO of several companies, from hedge funds to pharmaceutical and software development firms.

A born businessman, Martin Shkreli began investing in well-established companies such as Compaq and Amazon at the age of 12. He regards Bill Gates as his greatest influence and mentor. Shkreli has been described by people who have come into contact with him as brilliant, quirky, fascinating, terrifying, vicious, and extremely convincing.

Martin Shkreli was born on 17 March 1983 in Coney Island Hospital, Brooklyn, to Albanian parents. He has three siblings – two sisters and one brother; his parents had to do odd jobs in Sheepshead Bay, Brooklyn, to care for them.

Shkreli attended the prestigious Hunter College High School – a secondary school for gifted students in Carnegie Hill, New York. Over time, he became disillusioned with the school and dropped out in 2000 at the age of 17 to mysteriously take an internship with Cramer Berkowitz, a Wall Street hedge fund run by then CNBC financial expert Jim Cramer.

Although Shkreli started out in the mailroom, he was soon noticed by Jim Cramer for his skill in exposing small biotech scams. In 2003, he attracted the attention of the Securities and Exchange Commission (SEC) because he made accurate predictions about the failure of certain biotech companies (notably Regeneron Pharmaceuticals) on the stock market, causing Cramer to induce Berkowitz hedge funds to make huge profits by short-selling these shares.

He was suspected of having had insider sources in some of these companies and was also considered a “mole” for Cramer Berkowitz. However, after a proper investigation, the Securities and Exchange Commission could not prove questionable trading. Martin later attended Baruch College and received a BBA in Finance and Economics in 2004.

Martin Shkreli had made a bet of USD 2.6 million through Lehman Brothers that the market would decline. But the opposite was true, and so Lehman Brothers sued Martin Shkreli for failing to cover a “put option deal” when his prediction did not hold true. Shkreli refused to pay and threatened to file for bankruptcy, and although Lehman Brothers won the lawsuit and were to be paid $2.3 million, they went underwater during the global economic collapse of 2008 before they could collect the money due to them. Therefore, the judgment was overturned.

In 2009 Martin Shkreli co-founded another hedge fund called MSMB, which is simply a combination of his initials Martin Shkreli and those of his childhood friend Marek Biestek. Shkreli and Biestek were notorious for short-selling biotech stocks and scourging biotech companies in social media, highlighting their weaknesses and shortcomings with the sole aim of plunging their shares into the abyss.

In February 2011, Martin Shkreli founded a pharmaceutical company called Retrophin (a subsidiary of MSMB) with the goal of curing rare diseases. That same year, he would run out of stock of orexigenic therapeutics. This ended up as a catastrophic move, as he lost about $8 million, leaving MSMB almost bankrupt and only $60,000 worth of assets available to the company.

MSMB had to suspend all forms of trading. Nonetheless, Shkreli continued to send progress reports from investors, suggesting that their investments were okay and that they would make maximum profit with MSMB. This information was later released by the FBI. They also revealed that Shkreli had falsified documents by backdating them to suggest that MSMB had invested in retrophin, but on the contrary, Shkreli had actually skimmed money from Retrophin to pay off his personal debt as well as the debt of the MSMB treasury.

2015 was a very eventful year for Martin Shkreli. Like a moving train, Martin Shkreli founded another pharmaceutical company called Turing Pharmaceuticals in February. Turing is known for the development of three drugs, the intranasal version of ketamine (for depression), oxytocin (obstetrics), and Vecamyl (for high blood pressure). In August of the same year, Retrophin, which had replaced Shkreli, sued him for his deeds for USD 65 million.

Shkreli drew up a business plan to buy licenses for off-patent drugs and try to rejuvenate them. This way, his company did not really have to bother about bringing new drugs to the market, and they could spend less to make big profits. In accordance with his plan, Shkreli and Turing Pharmaceuticals bought the rights to market a drug for the treatment of toxoplasmosis (which is often used by AIDS patients) called Daraprim. Shkreli increased the price of a pill of Daraprim by an exorbitant 5,000% ($13-$750). He received fierce backlashes and criticism for his actions, but he remained stubborn and did nothing to reduce the cost of the drug.

Despite the fact that Shkreli denied the charges brought against him and received a bail of $5 million, this did not prevent KaloBios’ shares from falling 50%. Martin Shkreli had to stream his life live to his 200,000 subscribers on YouTube to fill his time.

In 2016 Shkreli founded a professional software company called Gödel Systems and tweeted that he would make the fifth application if summoned before a House Oversight Committee.

On August 4, 2017, after a fair trial, he was found guilty of two counts of securities fraud and one count of conspiracy to commit securities fraud. He was found not guilty on the remaining five counts of fraud, and based on his five not guilty verdicts, he posted bail, which was revoked when he posted a controversial post on Facebook offering $5,000 for a strand of Hillary Clinton’s hair.

He is currently based at the Metropolitan Detention Center in Brooklyn and would remain there until January 16, 2018, when his final verdict would be announced.

To the best of our knowledge, Martin Shkreli is currently single and has no wife or girlfriend. This is not a big surprise, his outrageous and controversial lifestyle is not the most attractive. Apart from that Martin never really had time for anything that had nothing to do with business. He spent all his time setting up businesses and closing deals. He seems a bit too selfish and overly ambitious to consider settling down with anyone. He also has more pressing matters to deal with and would understandably be more concerned about his freedom.

ALSO READ: Morgan Smith Goodwin Biography and All You Must Know About her

With the way Martin Shkreli conducted his business, it is no wonder that death row crooks were flying around him. However, they are only jokes, since he is obviously not dead, because dead people do not stand trial.

Martin Shkreli is currently in prison and is not dead.

Shkreli’s net assets were previously estimated at $45 million but later were estimated at just under $40 million because he leveraged his $4 million e-trade account for his deposit.

However, a more recent look at his assets after his trial has put his net worth at $70 million.

His wealth has given him certain preferences, such as collecting rare albums worth millions of dollars. He bought a single copy of the Wu-Tang Clan album “Once Upon a Time in Shaolin” for an alarming $2 million and also offered to become the sole owner of Kanye West’s “The Life of Pablo” for $15 million.

Shkreli bought an unpublished tracklist of Lil Wayne’s Carter V album and leaked some of the tracks online, but Lil Wayne threatened to sue, so Shkreli promised to stop the leaks. In fact, he bought the unreleased tracklist from an anonymous buyer of Lil Wayne’s Bugatti.