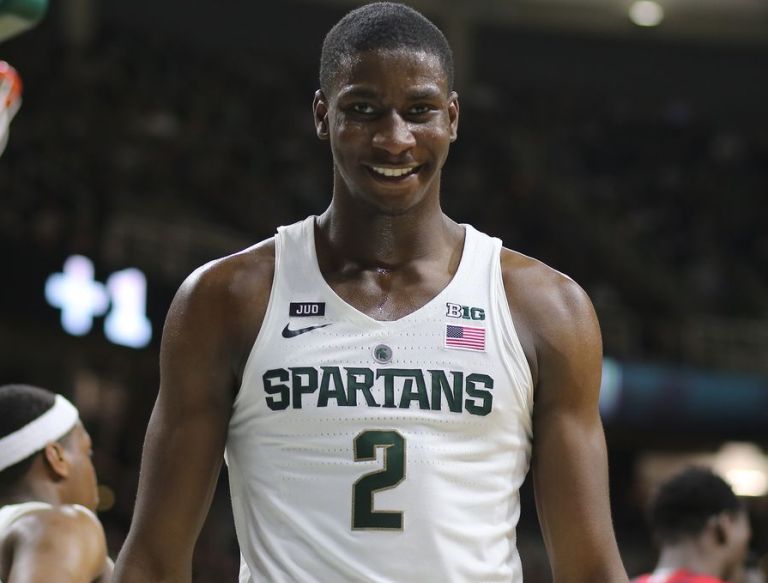 Jaren Jackson Jr. did not make the leap to the National Basketball Association (NBA) until 2018 and already has great prospects in the big league. The Power Forward/Center was praised for his overwhelming blocking skills, which earned him much recognition from the right side.

For his fascinating performance in high school, the B-Baller was voted the fifth-best player in the nation by Scout.com, first in his position. Again, he was ranked 7th and 4th in 247 Sports nationwide, while on ESPN 100, he was ranked 8th, second in his position. With such a remarkable record, much is expected of the American basketball professional, who was placed 4th overall by the Memphis Grizzlies in the 2018 NBA Draft.

Jaren also helped the U.S. National Basketball Team to bring home the gold at the 2016 FIBA World Championship. Let’s learn more about Jaren Jackson Jr., including details about his early life and other interesting facts about the professional basketball player.

Named after his father, Jaren was born on September 15, 1999. While his mother’s profession (Terri Jackson) has yet to be confirmed, his father is a veteran in the game. In his heyday, he played basketball and caused a sensation as Sharpshooting Guard in the NBA during a career that lasted more than ten years. Apparently, he passed the talent on to his son, who started playing early in life.

In high school, Jaren Jackson Jr. started with the team at Park Tudor School and ended his career at La Lumiere School, where he spent his last year of school. In Park Tudor, he averaged 10 points per game, 6 rebounds, and 3 blocks. He also won two IHSAA National Basketball Championships before moving to La Lumiere where he joined the national team. When he wanted to leave high school, institutions such as Michigan State, Notre Dame, Indiana, Purdue, Maryland, and many others lined up for him.

His rather short college career eventually ended with the Michigan State Spartans. He debuted with the team on November 10, 2017, with 13 points and 13 rebounds at the season’s level. He pulled off the feat with an outstanding 98:66 victory over the North Florida Ospreys. This was followed by a record season highlight (at that time) of 19 points with an 88:81 defeat against the Duke Blue Devils.

On December 5, Jaren Jackson Jr. set a record of 11 points and an 8-block career-high with a 62-52 victory over the Rutgers Scarlet Knights. He then scored 17 points, followed by 13 rebounds in the 88-63 victory over the Southern Utah Thunderbirds, which was a career highlight. In early 2018 he continued his record series with another season highlight – 21 points, 11 rebounds, and 6 blocks in an 87-74 win over Illinois Fighting Illini. The following month, he again set the bar high for his career with an 87-57 win over the Minnesota Golden Gophers with 27 points.

During the 2018 NBA Draft, Jaren Jackson Jr. made the breakthrough with the 4th overall selection, was selected by the Memphis Grizzlys, and then signed a multi-year contract with the team.

ALSO READ: Who Is Carter Page, Is He Gay, Who Is The Wife, How Is He Connected To Russia?

Apart from his parents, who have been identified as Jaren and Terri Jackson, there is little information about his family background, but what we do know is that the older Jaren seems to have left a legacy to his son, as he is a former professional basketball coach and has also played professionally in the NBA. There are no siblings in the picture, but this does not confirm that Jackson Jr. is an only child.

Besides, the young B-ball player is not yet married but is working on laying a strong foundation for himself in the big league.

His Height, Weight, and Body Measurements

Jaren Jackson Jr. is celebrated as the best big man in the 2018 NBA Draft and has the right body measurements for a basketball player. He stands at an intimidating height of 6 ft 9 in (2.11 m) and weighs 110 kg. His terrific physique also includes a span of 7′ 4 and a standing range of 9′ 1.