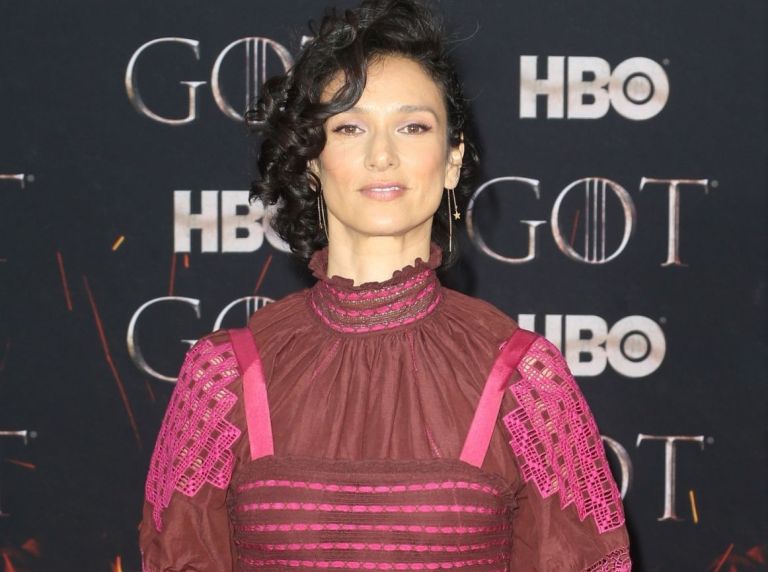 Being talented is not the only thing you need to excel in acting. It’s a big advantage, but good looks are just as important, and for the actress Indira Varma, who is undoubtedly strikingly beautiful and the kind of person who enters a room and makes heads turn, she ticked both boxes.

Indira is an English actress who is best known for her roles in Games Of Thrones, Human Target, Bride And Prejudice, Luther, and Rome. Read below to learn more about the actress.

Indira Anne Varma was born on September 27, 1973, in Bath, the largest city in Somerset, England. The names of her parents are not known, but it is known that her father is Indian, while her mother is of Swiss and Genoese descent; this mixed heritage explains her somewhat exotic appearance. She is the only child of her parents that she had an old age.

The high school she attended is another information about the actress that is not readily available. It is known, however, that when she was growing up she was interested in acting and in 1992 she enrolled at the Royal Academy of Dramatic Art (RADA), a prestigious acting school in London, which she graduated from in 1995. During her time at the RADA, she was also a member of the Musical Youth Theatre Company.

ALSO READ: Diana Melison Everything To Know About The Film Actress

Indira Varma’s professional career as an actress began in 1996 with her role in the television show “Crucial Tales”, where she played the role of Manreet in one episode. In that year Varma made a much bigger appearance with the role of Maya in the erotic-romantic historical film Kama Sutra: A Story of Love. This was the film that introduced her to the world and announced how talented she was.

Varma was able to get a role in this film because of her Indian origin. This again played a role in the decision to cast her in the Bollywood remake of the Jane Austen classic Pride and Prejudice. The remake was called Bride and Prejudice and Varma played the role of Kiran Balraj, a character based on the Caroline Bingley character from the novel. Bride and Prejudice were critically acclaimed and achieved a break-even result at the box office, with a budget of $7 million, bringing in $24.7 million.

In the following years, she had to play more interesting roles, which showed how good she was as an actress. Some other movies and television shows she has appeared in include Sixth Happiness, Jinnah, Basic Instinct 2, Exodus: Gods and Kings, Official Secrets, Rome, Carnival Series, Moses Jones, Silk, Paranoid and Human Target.

One of her most notable appearances was the role of Ellaria Sand in Game of Thrones; she appeared in 13 episodes, and during her time on the series, she was nominated, along with the cast, for outstanding performance by an ensemble in a drama series by the Screen Actors Guild.

Indira Varma has also been cast in video games as a voice actress. Among the games, she has been cast for are Dragon Age: Inquisition, Mass Effect: Andromeda, and World of Warcraft: Battle of Azeroth. She has also managed to strike a balance between theatrical acting and her film and television appearances. Among the plays she has appeared in is a remake of Othello in 1997, Ivanov in 2002, and The Hothouse by Harold Pinter in 2013.

Indira Varma has found a way to keep her private life out of the public eye. She has been very successful in doing so because little is known about how she met her husband or even the day they were married. She is married to Colin Tierney, who is also an actor like her. They have a child together and they all live in London.

Other Celebrity Facts About Indira Varma

Indira Varma is one of the few actors who follow the principles of methodical action to the letter.

Her first career choice was to become a mime, which her parents disapproved of. They advised her to learn acting instead, which she did.

Indira Varma’s net worth is estimated at $5 million.

Prior to 2017, May 14 was considered Indira’s birthday; however, she corrected this mistake on Twitter in 2017 and announced that her birthday was indeed September 27.

Her parents were immigrants in the United Kingdom who had met while studying at art school.