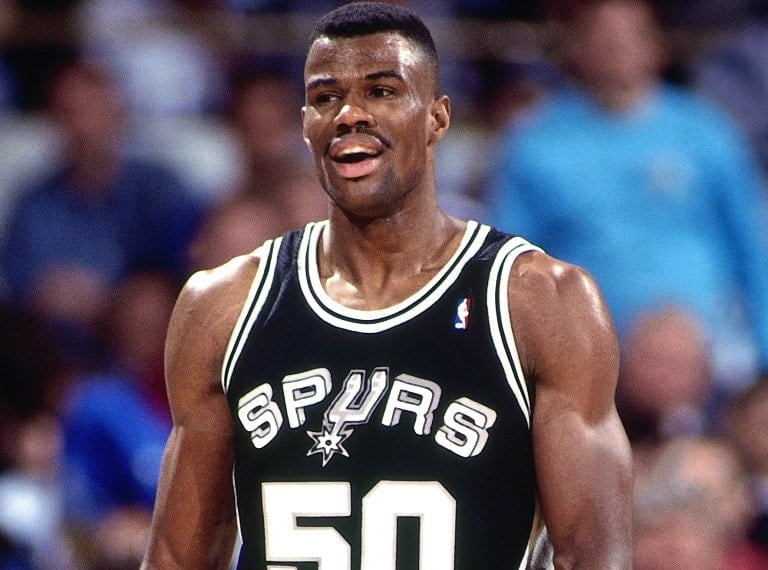 In the history of the NBA, there are less than a handful of mid-level players who can match the talent and performance of two-time NBA champion David Robinson. The ten-time NBA All-Star, who won four All-NBA First Team and four NBA All-Defensive Team selections, was the first overall selection in the 1987 NBA Draft of the San Antonio Spurs, the team with which he spent his entire career.

On August 6, 1965, Ambrose and Freda Robinson welcomed their second child, David Maurice Robinson, to the island city of Key West, Florida. As a child, the Robinson family moved throughout the United States and lived in various cities due to Ambrose’s work with the Navy. When he retired, the family settled in Woodridge, Virginia, where their son attended Osbourn Park High School in Manassas, Virginia.

David Robinson was an exceptional student who excelled in both his studies and sports, although it was said that he struggled in basketball even though he was over six feet tall at the time. However, in his final year of high school, he was accepted into the team by the coach of his school’s basketball team, and he earned honors for the entire area and district, although he had never actively participated in the sport. His only season highlight was not enough to arouse the interest of the colleges, so Robinson relied on his high SAT score to gain admission to study mathematics at the United States Naval Academy.

In his junior year as a member of the Navy Midshipmen basketball team, Robinson, who was now seven feet tall, earned the consensus honor of the second All-American team. In his senior year, he received the Consensus All-American Awards for the first team and the Naismith and John R. Wooden Awards before graduating. Upon graduation, he was selected by the San Antonio Spurs with the first overall selection in the 1987 NBA Draft. However, due to his active service with the Navy, Robinson had to wait two years before he could play basketball professionally.

After fulfilling his service obligations, David Robinson joined the Spurs for the 1989-90 season, where he was unanimously named NBA Rookie of the Year. In 1992, he joined the Dream Team, which won gold at the Barcelona Olympics. Robinson continued to dominate the NBA in various categories, but for some reason, he was unable to make a good bid for an NBA championship, even in 1995 when he was named MVP. It wasn’t until his team got the opportunity to sign Tim Duncan that Robinson was able to win the hard-to-reach NBA title twice.

David Robinson moved from the harassment of opposition players in the NBA to dominance in the venture capital market, whose net worth is now estimated at $200 million. The 2001 NBA Sportsmanship Award winner is said to have earned a salary of over $116 million during his playing career.

After his retirement, he put his money to good use by teaming up with former Goldman Sachs banker Daniel Bassichis to form Admiral Capital Group, a private equity firm that sought to invest in opportunities that offered both financial and social returns. The Group has grown since then and today has a portfolio valued in excess of $100 million and assets in the form of upscale hotels, office buildings, hospitality businesses, and retail stores valued in excess of $350 million.

After achieving so much success, David Robinson has made sure to give something back to the community. In 2001, he and his wife founded the Carver Academy in San Antonio, Texas, a Christian private non-profit school for downtown children. He has reportedly donated more than $11 million to the school. Robinson and Bassichis also donate 10 percent of their profits to charity.

David Robinson has been married to his wife Valerie Hoggatt Robinson for almost three decades. The couple, who are said to have met when Valerie was a student and David was a Navy reserve officer, formed the bond on 16 December 1991 in a Baptist church in San Antonio, Texas.

Together the couple has three sons: David Jr., Corey, and Justin. Just like Robinson, all of his sons are athletes, although none of them made it as a professional. David Jr. and Corey played soccer for the University of Notre Dame, while their younger brother Justin plays basketball for Duke University.

It is not clear what happened to the career of David Jr., but Corey, who played on the first team of the All-American Academic Team in his sophomore year, was advised to quit the game for medical reasons. As for Justin, who was selected twice by all the states in Texas, it remains to be seen whether he would make it into the NBA since he was only in his first year of college in 2015.