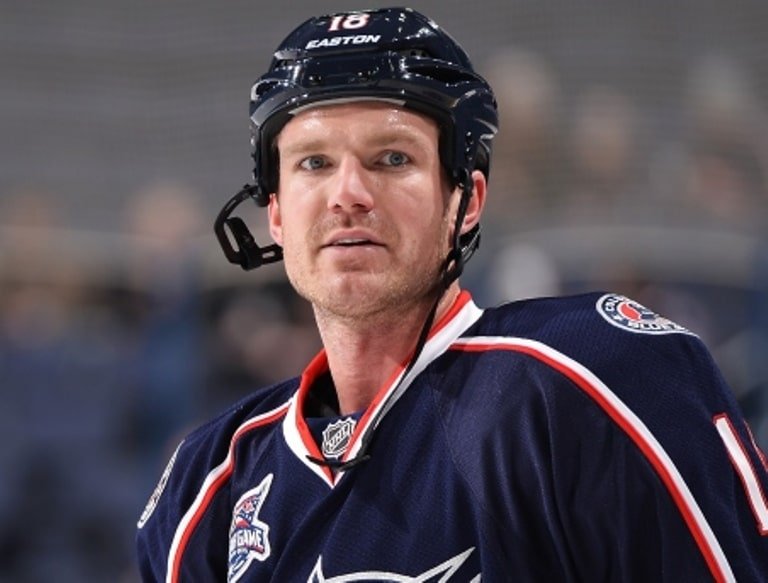 After being unable to meet the physical requirements before the start of the 2016/2017 season, hockey right winger David Clarkson was added to the Columbus Blue Jackets long-term injury reserve.

Worse still, he was retired for the rest of the season, which led to Clarkson’s unofficial withdrawal. And due to the severity of his injury, he may never play another NHL game. His contract was acquired by the Vegas Golden Knights in the 2017 NHL Expansion Draft. Although he is not playing, Clarkson continues to earn thanks to the 7-year contract he signed with the Toronto Maples in 2014.

His injury may have robbed him of playing time, but David Clarkson is still active as a hockey coach. In 2016, he volunteered as assistant head coach of Upper Arlington High School’s Bears Ice hockey team, which plays in the USHS-OH league. In 2017 Clarkson took over the position of head coach.

David Clarkson aka Dave Clarkson was born on 31 March 1984 in Etobicoke, Ontario, Canada. Influenced by his father, who was a season ticket holder for the Maple Leafs for a long time, Dave Clarkson grew up with a love for ice hockey. At the age of 15, he began his junior career with the Belleville Bulls of the Ontario Hockey League. He also played for the Aurora Tigers and ended his junior career playing for the Kitchener Rangers. In the 2002/2003 season, Clarkson won the Memorial Cup with Kitchener.

ALSO READ: Liddlenique Bio, Boyfriend, and Everything You Need To Know

The Canadian ex-hockey player turned pro in 2005, was not drafted, and was signed as a free player by the New Jersey Devils of the National Hockey League. A month after his enlistment, Clarkson was signed on for the Albany River Rats of the American Hockey League and later for the Lowell Devils, a small team of Devils who played in the AHL.

Before the end of the 2006/2007 season, Clarkson had improved enough to make his first NHL appearance with the New Jersey Devils. In his debut match against the Carolina Hurricanes, he did not score a single goal, but in his second game against Carolina he scored a goal, but unfortunately, it was not enough for his team to win, as the Devils lost 7-2 to Carolina.

As a result of the NHL 2012-13 lockout – a labor dispute between the NHL and NHLPA – Clarkson signed a contract with the Austrian team EC Red Bull Salzburg. However, he returned to the Devils in 2013-14 after the lockout was settled.

Unfortunately for Clarkson, an improved contract did not mean improved performance on the field. Dissatisfied with his rather rusty performance, Toronto had had enough in his second season with the club and swapped him for the Columbus Blue Jackets in return for the services of Nathan Horton. The unfortunate swap in July 2015 resulted in Toronto’s contract with Clarkson being described as one of the worst in the history of the NHL.

To be fair, it has to be said that Clarkson’s unimpressive performance was not solely his fault. A back injury that he had suffered since his days with the Devils would affect his continued performances. Without this injury, Clarkson might simply have become the star franchise player Toronto wanted him to become.

Clarkson found a way to play with the injury, but it got worse and worse over time. He needs surgery to repair the three degenerative discs in his spine, but should he ever opt for a surgery that would involve spinal fusion, his NHL career would be over. But without the surgery, Clarkson still needs a miracle to get back in the saddle.

ALSO READ: Brandon Pirri (Ice Hockey) Biography and Facts You Need To Know About Him

1.  His dream as a little boy was to play for the Toronto Maple Leafs.

3. Deals in the NHL are guaranteed, which means that Clarkson continues to earn even though he is not an active player. However, Clarkson’s contract is insured, which means that according to the terms of the contract, he can only get paid 20% of the gross amount of his deal. By the end of his contract in the 2019/2020 season, Clarkson will have to pay an estimated $5.7 million.

4. In 2010 Clarkson married Brittney Roberts, with whom he has three children, including two daughters McKinnley (born 2011) and Teagan (born 2016) and one son Colton (born 2013). The Clarkson lives in Upper Arlington, Ohio.

5. David Clarkson is 6 feet tall and weighs about 200 pounds.

6. He runs a charity called Clarky’s Kids in Kitchener, Ontario. It was started in 2007 and its goal is to raise money for sick children.