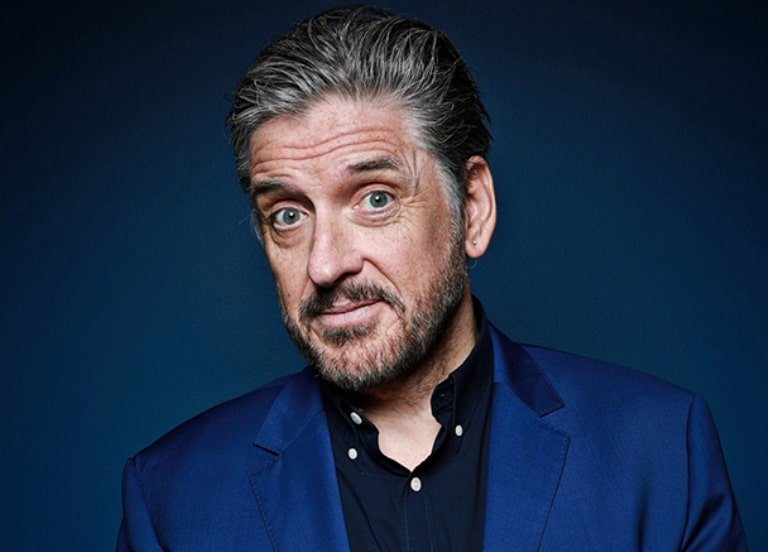 It is well known that excessive alcohol consumption means a premature end to beautiful lives and careers. Most people who drink to a stupor have admitted that getting out of the habit is as difficult as getting clean after taking hard drugs. But the opposite is true of actor, comedian, and director Craig Ferguson, who dropped out of high school for excessive drinking but reached the peak of his chosen career after he managed to curb his drinking habit through a 12-step recovery program.

Let us introduce the man who fought against all odds to succeed.

Craig was born the son of Robert and Janet Ferguson on 17 May 1962 at Stobhill Hospital in the Springburn area of Glasgow. He was born a Scottish Presbyterian. He grew up in nearby Cumbernauld with his three siblings, two sisters and one brother. The effects of the Second World War caused his family to move from their home in Springburn to a council flat in Cumbernauld when he was six months old. His early life was not rosy, his father Robert Ferguson was an ordinary postal worker who struggled to raise him with his siblings.

He was naturalized as a citizen of the United States in 2008. He received his early education at Muirfield Primary School and later at Cumbernauld High School, which he left at the age of sixteen for alcohol-related reasons. Craig became an apprentice electronics engineer in a local factory of the American company Burroughs Corporation. In 1975 he visited the United States for the first time, visiting an uncle who lived on Long Island near New York City. Later he moved to the Big Apple, where he got a job in the construction industry and later worked as a bouncer at the nightclub Save The Robots.

In the early 1980s, Craig spent a few years as a drummer in punk bands. Through a bartending job, he met Michael Boyd, the artistic director of the Tron Theatre, and it was Boyd who convinced Craig to try acting. For Craig, the attraction of acting was too strong to be ignored, and so he was addicted to entertainment for a lifetime.

Although his career began in the UK with music, theatre, and comedy, he switched to movies and television shows when he moved to the United States. There he appeared as Nigel Wick in the ABC sitcom The Drew Carey Show, which ran for 8 years (1996-2004). Since then Craig has starred in three movies and directed one. He has also appeared in several other films and in many dubbing roles for animation. Writing is also one of his skills; he has written two books: Between the Bridge and The River, (novel) and American on Purpose, (memoirs). He became a citizen of the USA through naturalization in 2008.

Craig Ferguson has also been a guest on The Tonight Show with Jay Lenon, The Late Show with David Letterman, Countdown with Keith Olbermann, Late Night with Conan OBrien, Rachael Ray, Real Time with Bill Maher, The Howard Stern Show, The View, Loveline, The Daily Show The Soup, The Talk, The Dennis Miller Show and The Late Show with Stephen Colbert and many others. Craig was a live co-host with Regis Kelly and Kelly Ripa. He also appeared as a guest host on the episode of The Price Is Right, which was shown on Jesters’ Day in April 2014, and also appeared on an episode of We Love You.

Who is Craig’s Wife? Kid

Craig’s love life was an active one, his first marriage lasted three years. He married Anne Hogarth in 1983 and the couple was divorced in 1986. The actor was single for a long time after his first marriage, so long that his fans already began to believe that he might not marry again when he suddenly surprised everyone with his marriage to Sascha Corwin. The couple was blessed with a child, Milo Hamish Ferguson, born in 2001.

Like the first, Craig’s second marriage ended in divorce, and in 2008 he entered into a third marriage with Megan Wallace-Cunningham. Megan is a well-known name in the art world, and the prominent couple still lives happily together. They have a son in common – Liam James, whom Craig was proud to announce his birth in 2011.

By all indications, Craig Ferguson cannot be called gay as he has had three normal marriages with the opposite sex and is currently enjoying marital bliss with his third wife Megan Wallace-Cunningham. Moreover, his children are further proof that he is not attracted to his fellow men.

Height: How Tall is Craig Ferguson

Craig is quite a good-looking man despite his age. He stands at a height of 1.88 meters (6 feet 2 inches) and has a circumcised figure.