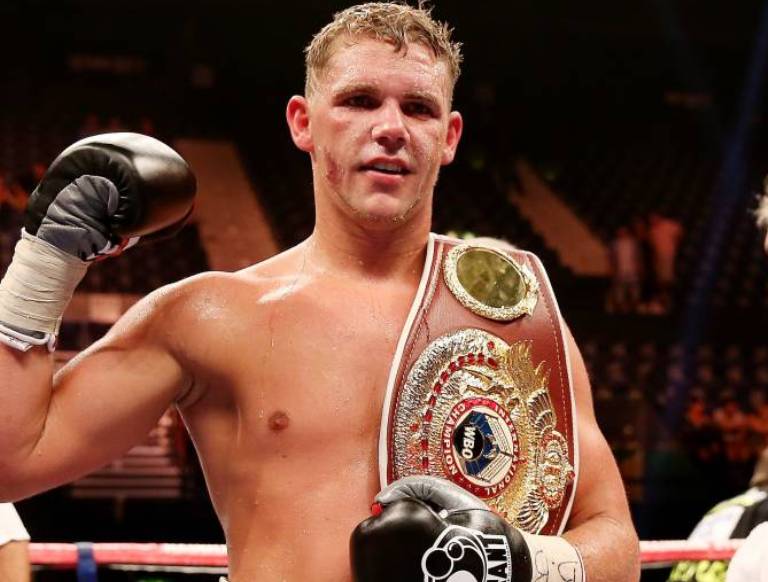 The fast-rising British professional boxer Billy Joe Joe Saunders has distinguished himself as the unbeaten WBO middleweight champion since 2015. The great boxer became a professional in 2009, and since then he has fought 26 fights and has not lost a single one to date. Accordingly, in 2008 he won the gold medal at the European Union Amateur Boxing Championship in Cetniewo, Poland.

Furthermore, he currently ranks second in the Transnational Boxing Ranking as the second-best active middleweight boxer; fifth in BoxRec, third in The Ring Magazine, and others. Read on as we take you through Billy Joe Saunders’ biography, career, body statistics, and other facts.

Billy Joe Saunders was born on August 30, 1989, in Welwyn Garden City in Hertfordshire, England. The boxer was born as the son of the English parents Tommy Saunders and his wife. His great-grandfather, Absolom Beeney, was a well-known bare-knuckle boxer in his community in his day; Billy went the same way and today he has established himself as the undefeated middleweight champion. Although there is not much information about his family, we can state that the boxing champion has an older brother named Tom Saunders Jr. Billy began his boxing career at a very tender age and fought for his community-based boxing club before he became a professional. Saunders has British citizenship while he is of white descent.

During his amateur career, Saunders won his first 49 fights and in 2007 he competed in the Commonwealth Championships. The following year he won the 2008 Strandya Cup after defeating Cuban boxer Carlos Banteux. He also won a place at the 2008 Beijing Olympics after finishing third in the semi-finals of the qualifying round after his triumph over Pavol Hlavacka. At the Olympic Games, he reached the second round of the competition before being eliminated by Carlos Banteux. Towards the end of 2008, Saunders became a professional and signed with Frank Warren as his manager.

ALSO READ: Who Is Greg Monroe Of NBA? Here’s Everything You Need To Know

At his professional debut on February 28, 2009, Billy Joe Saunders celebrated his first victory over Attila Molnar in the National Indoor Arena. He celebrated the same success in his second and third fights against Ronny Gabel and Matt Scriven respectively. Saunders finished seven more fights that ended with a knockout victory; in 2011 he fought against top stars such as Norbert Szekeres, Kevin Hammond, Gary Boulden, and Tony Hill. He also won his first professional title at the Commonwealth Regional Middleweight Championship in April 2012. Shortly thereafter Saunders successfully defended the title against Bradley Pryce in June and Jarrod Fletcher in September of the same year.

The following year he successfully defended the same title after winning against Matthew Hall in March 2013. He later defeated Gary O’Sullivan in July and John Ryder in September to retain the regional title. In 2014 he participated in the European Middleweight Championship, where he won after beating Emmanuele Blandamura and Chris Eubank Jr.

In 2015, Saunders defeated the WBO’s defending middleweight champion, Andy Lee, to win his first middleweight world championship title in July 2015. He successfully defended the title against Max Bursak in April 2016 and Artur Akavov in October of the same year. Saunders also defended the title for the second time in September 2017, when he defeated Monroe Jr. in a fight at the Copper Box Arena in London. His third title defense was against David Lemieux; Saunders defeated Lemieux with his big power punches to retain his middleweight title. Saunders expected a big fight against Gennady Golovkin, and currently, the fight against Demetrius Andrade is scheduled for October 20, 2018. The fight will be held at TD Garden in Boston, Massachusetts.

His Height, Weight, And Body Stats

Billy Joe Saunders has remained unbeaten since the beginning of his professional boxing career; all thanks to his world-class skills and resilience. A quick glance would show you that the middleweight champion has a well-built body and a great physique. Moreover, he is a very resistant fighter who can hold his own in any competition. He is not as tall, but with a good height of 5 feet 9 inches (1.80 m); Saunders still does an excellent job in the ring. He has a corresponding body weight of 74 kg. His chest waist biceps and foot sizes are not available at this time. He has light brown eyes and hair of the same color.