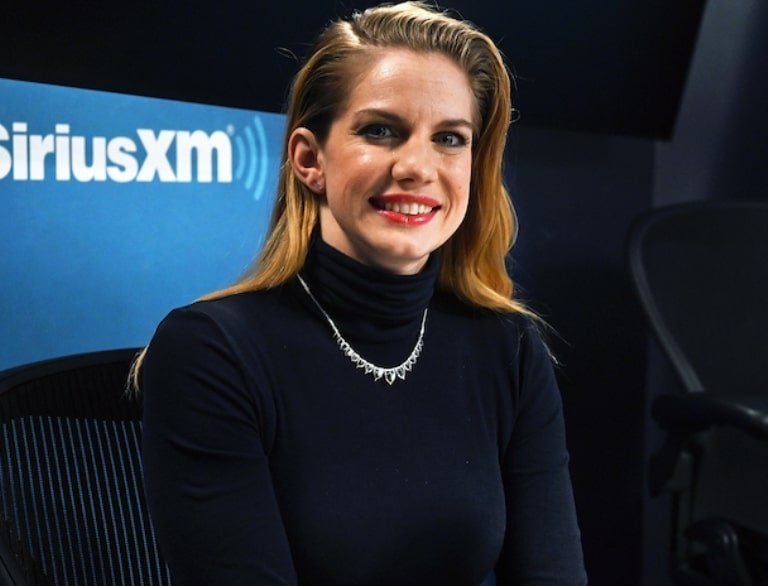 The American actress Anna Chlumsky is best known as a child actress, who became famous in the showbiz world through the film My Girl in 1991 and its sequel from 1994, in which she played the leading role of Vada Sultenfuss. The actress had also modeled at the tender age of 10 months when she worked alongside her mother in an advertising campaign. However, after her big break in 1991, she did not stay in the spotlight for long when she interrupted acting to continue her college education, but she came back and enjoyed a flourishing career.

Let’s take a look at the biography, career, married life, and other details about this child actress who became a screen diva.

Anna was born in Chicago, Illinois, on December 3, 1980, the daughter of mother Nancy and father Frank Chlumsky, who were both into entertainment. Her mother was a singer, actress, and former flight attendant, while her father was a saxophone player in addition to his job as a cook. Her family is Roman Catholic and her ancestry is said to be of Czech and Croatian descent.

Anna is said to have attended Grace Lutheran Church & School and later Walther Lutheran High School. Her acting career, which began at a very early age, ran parallel to her early education, when she appeared in films such as Uncle Buck, Trading Mom, in which she portrayed Elizabeth Martin, the mystery adventure film Gold Digger: The Secret of the Bear Mountain, in which she played Jody Salerno, as well as in her cinema success My Girl 1991 and its sequel in 1994. She made her debut on the small screen in the film A Child’s Wish, in which she played Missy Chandler. She also appeared in the sitcom Cupid and in the film Early Edition, which is a drama fantasy.

The actress interrupted her acting career between 1999 and 2005 while studying at the University of Chicago, where she earned a BA in International Studies. After graduation, Anna did not immediately return to acting, as she tried to take on other jobs, such as fact-checker for the Zagat survey and assistant editor, which she did not like, and decided to quit and return to acting. To improve her acting skills, she enrolled in the Atlantic Acting School in Manhattan.

Anna Chlumsky returned to the big screen in 1995 in the film Wait, in which she played the leading role of the character Cara. In the same year, she also received another role in the play The Colonel’s Holiday and gave a wonderful performance in the play Balm in Gilead by Lanford Wilson in November 2005 at the American Theatre of Actors, New York City. She has been a guest in such a successful series as 30 Rock, Law & Order, and Blood Car.

The actress made her comeback in the satire In The Loop, in which she played Liza Weld and which was published in 2009. That year she also appeared in an off-Broadway play entitled Unconditional at The Public Theater, directed by Brett C. Leonard in collaboration with the Labyrinth Theater Company. She has appeared in such notable films as House Rules, The Good Guy, My Sweet Misery, Civil Unions: A Love Story, The Pill and Bert, and Arnie’s Guide to Friendship, and many others. Her current film is the comedy Veep, which is broadcast on HBO and in which she plays Amy Brookheimer, the assistant to actress Julia Louis-Dreyfus.

Anna earns well from her acting career, so her net worth is about $1 million. It is important to note that this is not her only source of income. The actress has tried her hand at several entrepreneurial ventures, from which she also earns a handsome sum.

Who Is Her Husband?

Graceful Anna Chlumsky is happily married to her university sweetheart Shaun So, a Chinese-American who is in the army reserve. The couple began dating while still at school, and when Shaun So was sent to Afghanistan from 2004 to 2006, the relationship continued when they announced their engagement in October 2007.

Their wedding took place on March 8, 2008, in Brooklyn, New York City, where they currently live. The couple has two daughters named Penelope Joan So and Clara Elizabeth So.

Anna Chlumsky is said to have a height of 5 ft 2 inches, gracefully carrying her slender figure.